Next up for my eight Great-Grand parent blog is Frank Day who was born 28th January 1878 at 11, Peacock Street, Gravesend, Kent, the youngest of seven children, born to Thomas Frederick Day and Louisa Day nee Hallsey. 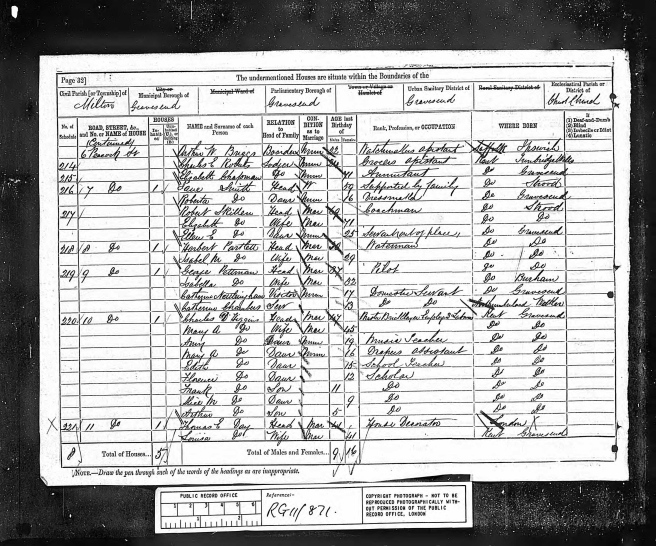 The young Frank Day obviously liked School and excelled whilst he was there, over a number of years various articles appeared Gravesend Reporter detailing Frank’s numerous School awards;

(As a child growing up, after my own Father died, I lived with my grandparents for around five years and I can distinctly remember the Ship mentioned above, being in my Nan’s house, on the sideboard. It looked very similar to a Chinese Junk Ship. The sad part is, despite asking all the family about the Ship, it appears to have sadly gone the way of the tip and has been tragically thrown out. If only they knew the story!)

Higher Grade School, Gravesend – The result of the drawing examination, which took place 9th February last, has been received. The school has obtained the highest award – Excellent, Out of 17 Boys presented for cards of merit 19 passed including Frank Day.

So clearly the young Frank Day had a flair for drawing and did extremely well whilst at School.

At the age of 13, Frank Day is now living with his Family at 41, Wingfield Road Gravesend; also present at the 1891 census are his parents and his sister Louisa Day. 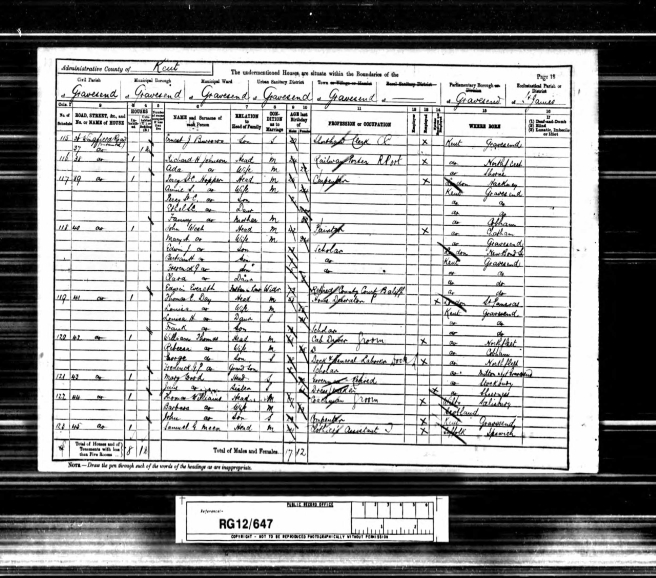 The next two years see a very dramatic change in the young Frank Day’s life as he signs up with the Merchant Navy to work as a trainee steward.

“As a young man Frank Day served as a steward at sea and was at one time in Australia.”

Verbally recorded from his Granddaughter, Ann Chiddicks and taken from information on the back of a photograph.

Frank is missing in the 1901 census and this ties in with him working on a ship and being overseas at the time.

I was able to find three records on Ancestry that confirmed Frank Day’s service as a steward overseas;

Frank Day aged 15 is listed as being an Officer’s servant on the Ship Port Humber of London that arrived in Sydney, New South Wales on 23rd October 1893.

Frank Day aged 22 is listed as being a General Steward on the Ship China of Belfast that arrived in Sydney, New South Wales on 24th January 1901.

The links to these. are here;

Whilst Frank was working away on the Ships, his mother Louisa Day (nee Hallsey) sadly died at the age of 63. This must have had a devastating effect on Frank Day, judging by the very emotive and loving messages that he posted in the Gravesend Reporter.

“Day – In sorrowful and loving remembrance of our dear Mother, the beloved wife of Thomas Elisha Day, who departed this life on May 19th 1899 at 41, Wingfield Road, Gravesend.

How sudden was her death to us,

And a great surprise to us all,

When God did say, you must away,

Could she refuse his call

And miss the face we loved so well.

Yes, harder than our tongues can tell.

Time has passed and friends around us,

Think the wound has almost healed;

But they little know the sorrow,

That lies within our hearts concealed.

Inserted by her sorrowing husband and children, Louie, Annie and Frank.”

One year later Frank also posted this very sad tribute to his late Mother, it almost feels intrusive reading this, all these years later, and I challenge you to read it and not feel a lump in your throat.

“Day – In sad and loving remembrance of my dear Mother, who departed this life May 19th 1899, at 41, Wingfield Road, Gravesend.

One year has passed dear Mother

No more thy face I will see

But with a son’s fondest love

My Memory clings to thee

Not one word to me could you say,

Hard seems my lot which has befell,

For I was not there for the last farewell.

Had I known that death was near you,

With its swift and awful tide.

Nothing would have kept me from

My darling Mother’s side.

Inserted by her sorrowing son, Frank.”

Such a sad and loving tribute, one can only speculate at the impact that this had on Frank Day, but we can also imagine that Frank and his Mother must have had a wonderful relationship together. 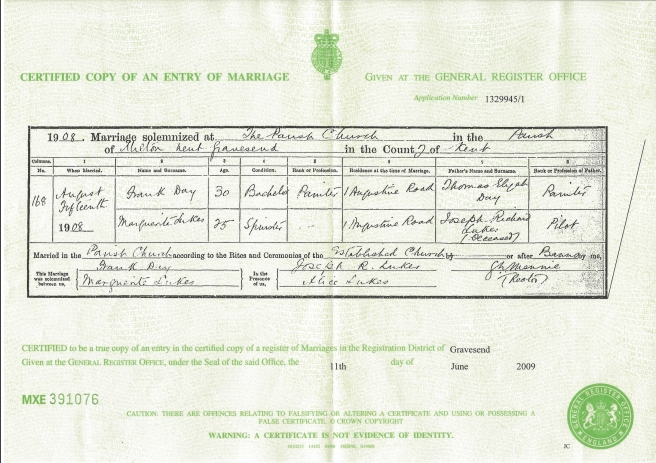 Whether it was the loss of his Mother or maybe meeting the love of his life, somewhere between 1901 and 1908, Frank’s career as a Steward at sea ended and he returned to the family home in Gravesend in Kent. He Married Marguerite Longland Lukes on 15th August 1908 at The Parish Church, Milton, Gravesend, Kent. At the time of the marriage Frank Day was living at 1, Augustine Road, Milton, Gravesend, Kent and was employed as a Painter, the same profession as his Father. 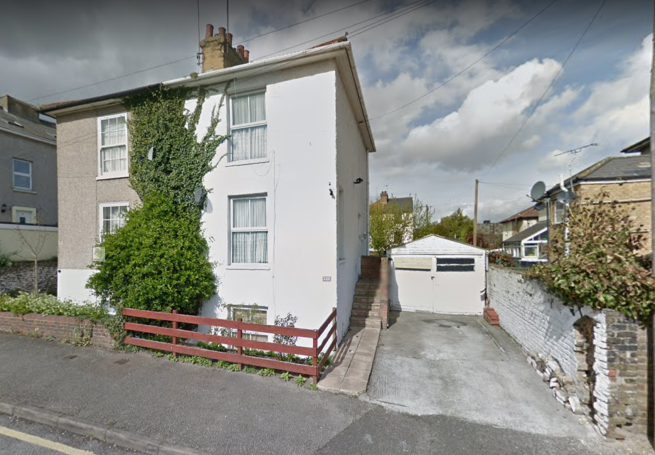 Frank Day’s first child was born 23rd July 1909 and by this time the family had moved across the River and were living in Grays in Essex. The 1911 census shows the family living at 58, Salisbury Road, Grays, Essex in a terraced house with five rooms. Living at the house at the time were Frank Day and his Wife Marguerite Day, Marguerite’s Mother Sophia Lukes and her brother John Lukes, as well as their new born Son Francis Norman Day and Frank Day’s Cousin, Richard John Couzens (yes genuinely his “Cousin” was a “Couzens”). Interestingly Richard John Couzens was employed as a Steward, his Uncle John was employed as a Ship’s Mate, whilst Frank himself was employed as a Ship’s Painter. Certainly a lot of connections with the Shipping Industry.

During this period and whilst I was trying to see if Frank Day had served in World War 1 (see notes below regarding the photographs), I was able to establish a number of entries for Frank Day in both the Electoral Registers and local newspapers.

Mr Frank Day of Salisbury Road, Grays, was co-opted as a member of the Grays Urban Council, in place of Mr. A. Greenfield resigned.

Since writing his last report Mr. Frank Day, Secretary of the Grays and District Trades Council, has been co-opted a member of the Grays Urban District Council in place of Mr. Greenfield, a Labour Member, who has been called up under the Military Service Act.

Frank Day is also counted in various Electoral Registers from 1918 to 1929 living at 58, Salisbury Road, Grays.

Sadly at the relatively young age of 41, Frank’s Wife, Marguerite Longland Day died on 21st June 1925 at The Hospital, Bath Street, Kent. Marguerite sadly died from Chronic Parenchymatous Nephritis, which basically describes a type of Kidney failure, possibly attributed to Scarlet Fever. Informant at Marguerite’s death was her husband Frank Day and he is listed as living at 58, Salisbury Road, Grays and his occupation is Ship’s Painter, Tilbury Docks.

At the end of 1926 there were two separate events in Frank Day’s life, firstly his Marriage to his second wife Jessie Bertha Luttman in Orsett, Essex and that was closely followed by the Birth of a Son, Douglas Alan Day. In the interests of keeping things closely guarded, shall we just say that both these events occurred in the same registration quarter, so enough said about that. Sadly young Douglas Day’s life was a short one, as he sadly died in 1928. Two more children followed, Trevor Kenneth Day born in 1932 and Josephine Margaret Day born 29th October 1934, the family home at this time was still 58, Salisbury Road, Grays and Frank Day’s occupation had changed slightly to a Painter in a Margarine Factory. Further research found that the Company in question was Van Den Bergh and Jurgens.

By 1939 Frank and his wife Jessie and their son Trevor are all still living at the same address of 58, Salisbury Road, Grays and Frank is still employed at Van Den Burgh and Jurgens as a Painter. 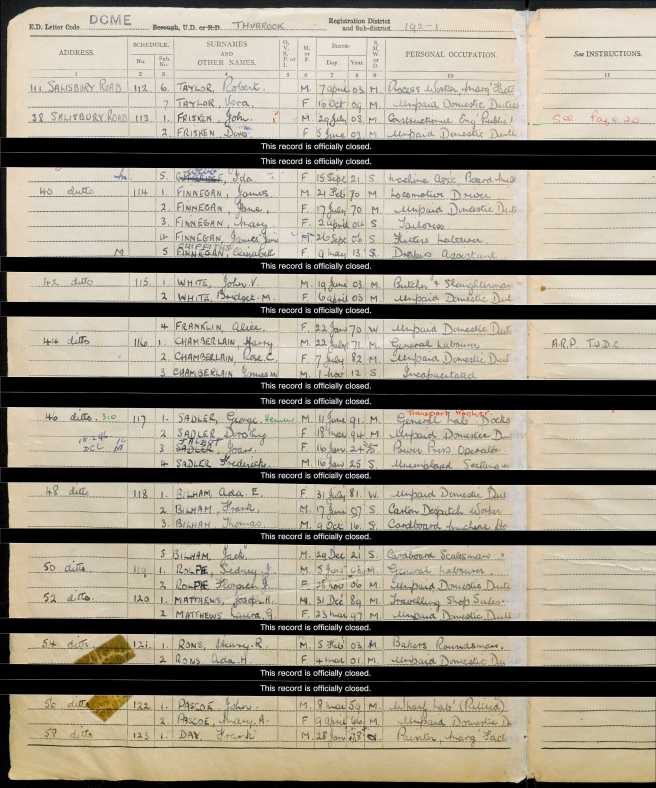 The next record we find for Frank Day is his sudden death on 4th November in 1945, from a Cerebral Haemorrhage, his death occurred at 9, Somerset Place, Gloucester. Initially this took some investigation to get to the bottom of why Frank Day had died at Gloucester. His Death certificate indicated both the address in Gloucester and also his address of 58, Salisbury Road, Grays. From both oral testimony from family members and also backed up by Newspaper Reports, I was able to establish that Frank Day was living with his Daughter Doris Day (yes, it’s genuinely her name) and working at an Aircraft Factory, thought to be The Gloster Aircraft Company, with his son-in-law Bill Rainbird. This was supported by the following press cuttings after Frank’s death.

Taken from the press cuttings after Frank Day’s death on 4th November 1945:

Mr. Frank Day, of 58 Salisbury Road, Grays, collapsed and died at Gloucester on Sunday. Mr. Day who was 67 years of age had lived practically all his life at Grays and until he retired, worked at Messrs.’ Van den Berghs and Jurgens. Latterly he had been employed at an aircraft factory at Gloucester. He leaves a widow, three sons and four daughters.

Mrs. Day & Family, of 58, Salisbury Road, Grays, wish to express their sincere thanks to all kind relatives, friends and neighbours for sympathy shown and for the beautiful floral tributes sent in their great loss of a dear husband and father: also to Messrs.’ Thompson for the funeral arrangements.

The last will and testament of Frank Day, of 9, Somerset Road, Gloucester, left £193 11s and 1d to Jessie Bertha Day.

As a footnote to the story;

I was recently given three photographs of Frank Day, taken over a number of years, the first shown below was taken in Australia whilst the young Frank Day was working as a steward and he is approximately 20 years of age.

The second wonderful image shows three generations of the Day family photographed together. The elderly gentleman, who is seated, is Franks Father, Thomas Elisha Day, the small child is Frank’s first born Son, Francis Norman Day (Frank Day Junior) and the gentleman standing is Frank Day himself and this image is taken around 1912/1913.

The last image of Frank Day is taken during WW2, in 1943 and is a studio photograph. I recently submitted all these photographs to Family Tree Magazine’s photograph analyst, Jayne Shrimpton, to confirm that these were all indeed, the same person and right ages. Jayne kindly confirmed that these were all likely to be the same person, but what Jayne did identify, that I had previously not noticed myself, was the fact that Frank Day is actually posed with a Royal Field Artillery Badge on his lapel. Now despite two years of research and enquires, I have been unable to conclusively find any evidence of a Military career for Frank Day in WW1, or find any known relatives that Frank might have worn the badge to commemorate. So despite trying hard to find a reason I am left to wonder why Frank Day is seen here wearing a Royal Field Artillery Badge.

8 thoughts on “The Life and Times of Frank Day”