Welcome to Week 15 of my Genealogy Challenge, from the wonderful Amy Johnson Crow, of writing something about one of my Ancestors every week for a year, hashtag 52Ancestors in 52 Weeks. Week 15’s prompt is “Fire”.

Originally I was going to write about my “Fire Fighting” Ancestors, but I have already covered them in Week 3 with my “Long Line” of Firefighters which can be found Here

This time I am actually going to write about an actual Fire involving one of my Ancestors, namely John Chiddicks and the total destruction of the Cottage that he was living in at the time and the lucky escape for him, his wife and their grandchild.

The Fire occurred on 25th March 1884 at Great Mussell’s Farm, Bowers Gifford in Essex. The Farm was owned by Major Spitty, J.P. for Billericay at the time.

John Chiddicks, who was a shepherd at the time, got up around 1-30 am to check on some sheep that were laying in a yard adjacent to the cottage. He left a glass paraffin lamp burning upstairs on a chest of drawers, his wife and grandchild were still in bed at this time. He had been outside with the sheep for around half an hour when his wife came and told him that the lamp had burst and he could not go back into the bedroom as it was full of smoke.

All of the Chiddicks family possession’s were burnt, with the exception of two chairs, the beer cask and the wine bottles, which were all rescued safely. Mrs Chiddicks and her Grandchild escaped with nothing on but their nightclothes and Mrs Williams, from Bowers Rectory, kindly sent some clothing over to Mrs Chiddicks. The estimated losses were £100 which was covered by Insurance.

The Fire was entirely contained to the cottage and fortunately did not extend to the farm premises as there were around 250 lambing ewes in the yard.

The Rayleigh Fire Engine was sent for and arrived at around 5-30am but too late to save the cottage.

(Taken from The Chelmsford Chronicle) 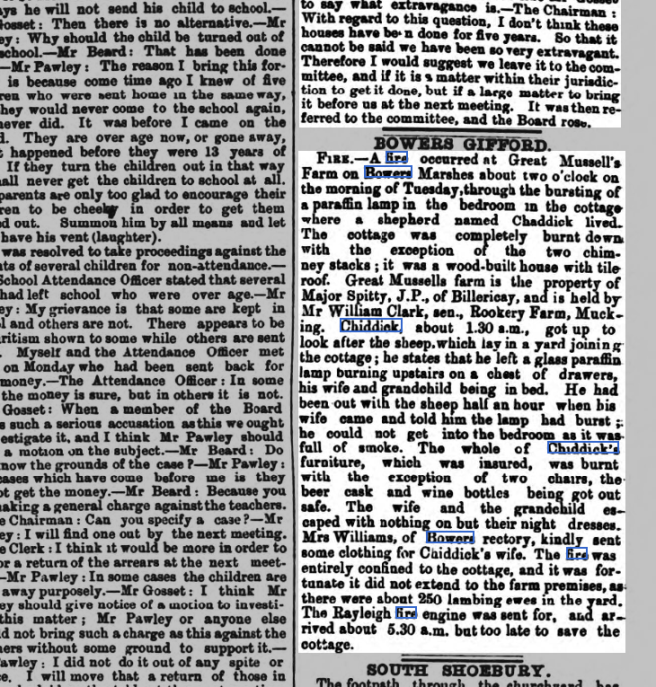 (Taken from The Southend Standard and Essex Weekly Advertiser)

Some of my first thoughts were, all their worldly possessions amounted to only £100. Their first thought was to save the Beer Cask and Wine! The Fire Engine took three and half hours to arrive! How times change………………what would you save first after your loved ones?