Welcome to Week 33 of my Genealogy challenge, from the wonderful Amy Johnson Crow, of writing something about your Ancestors for a whole year, #52Ancestors in 52 weeks. This week’s prompt is ‘Troublemaker’.

We all like the idea of finding a ‘Loveable Rogue’ on our Family Trees, maybe a bit of a naughty lad ,who’s had a few brushes with the Law. After all it makes our Tree all the more interesting.

My so called ‘Troublemaker’ is actually a Young Woman called Sarah Day.

Sarah was the oldest of Four Children born to George and Sarah Day and she was born in Vineyard Gardens in Clerkenwell in 1809. She was later Baptised with her two Siblings, George Edwin Day and Henry James Day on 27th March 1815 at St. James Church Clerkenwell.

Sadly the story for Sarah is a somewhat limited one, unfortunately somewhere along the way, our Sarah lost her way slightly, whether it was necessity, or whether it was greed, we will never know the full story, of what lead to her fall from grace.

Here is the account of The Old Bailey Proceedings dated 10th April 1828.

CLEMENT CHEESE. I am a silversmith, and live in Clerkenwell, the prisoner was in my service. On the 1st of March I found I was deficient in my stock and on the 3rd I was deficient again; I told her on the Sunday that I was deficient, and I would know who it was. On the Monday I told her I was short again, and I would see in her box; she said, she was never called a thief before, I said, if she had nothing of mine, she could not object to my seeing her box; she hesitated. I went up stairs with my errand-boy; she opened her box and took out a small paper parcel, which she tried to put into her pocket, the boy stopped her hand, and we found it was this piece of silver. I told the boy to empty out the box, and we found some more silver, she fell on her knees and begged forgiveness; here is an ancient coin among it, which I know well, and a piece of an ingot; she only lived eleven days with me, and came from the office in Holborn. (Property produced and sworn to.)

BENJAMIN DUKE . I am Mr. Cheese’s errand-boy; I saw the silver found in the prisoner’s box, she asked forgiveness.

WILLIAM BROWN EDWARDS . I am an officer and took her in charge.

Once in Australia, convicts lived in barracks and worked in gangs, building roads and bridges or working on farms or quarries. Some were sent out to work for farmers. If they behaved themselves, their sentence could be reduced by a ‘ticket of leave.’  The majority of convicts decided to stay in Australia at the end of their sentences, recognising that they could make a better life there than returning to Britain and, probably, poverty and crime.

This quote on the National Library of Australia web page sums up Sarah Day’s circumstances perfectly.

“Female convicts were predominantly young, single women who had been domestic servants and/or who had come from a semi-skilled background – such as an apprenticeship. The majority of female convicts were first time offenders sentenced to transportation for minor theft (Oxley, Deborah, Convict maids 1996 , pp. 42-48).”

The above record shows that Sarah Day was held in a Penitentiary rather than a Prison Hulk.

There is a petition registered for Sarah Day in The Home Office Criminal Petitions: 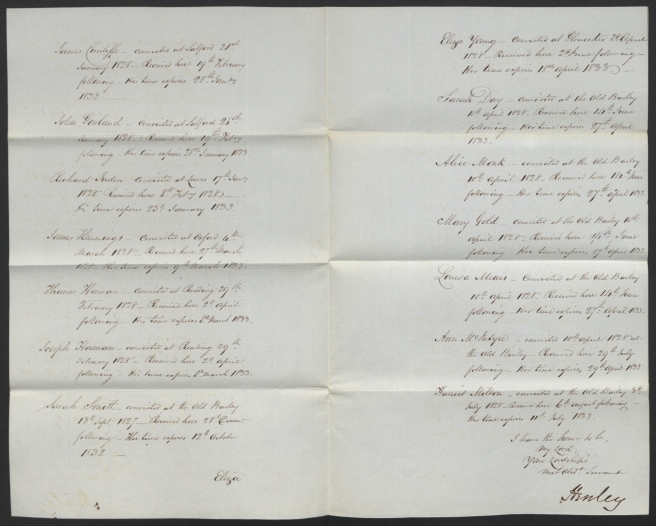 So it would appear from the above Petition record, that Sarah Day appealed against her harsh sentence of 7 years Transportation, which was upheld and her imprisonment ended on 27th April 1833.

Of the main players in this story, the Officer in Charge, William Brown Edwards is stationed at the Hatton Garden Station and appears in several other Old Bailey proceedings. Clement Cheese appears as a Juror in 1827 and Benjamin Duke disappears without a trace.

Clement Cheese was a specialist Master Spoonmaker whose work now, is highly collectable, see the eBay listing Here (details added thanks to the sharp eye of Stephs Family History, her blogsite can be found Here

I initially thought that finding these records and finding out more about what happened to Sarah was going to be relatively straight forward, but far from it. There is no mention of the trial, that I can find in any of the Newspapers and subsequently it’s proved hard to establish anymore records for Sarah Day. Given I have only been looking at Sarah’s story for a week, I am sure that there are lots more to uncover about what happened to her.

So keep an eye out for Part Two of this story

So in keeping with the theme, Sarah Day has been a ‘Troublemaker’, in more ways than one!