After recently moving house, I was absolutely delighted to discover that there is a vast amount of history that surrounds the market town of Nantwich in Cheshire, where I live, and as someone with a keen interest in local, as well as family history, I felt compelled to tell you about “The Battle of Nantwich” and the part it played in English History. 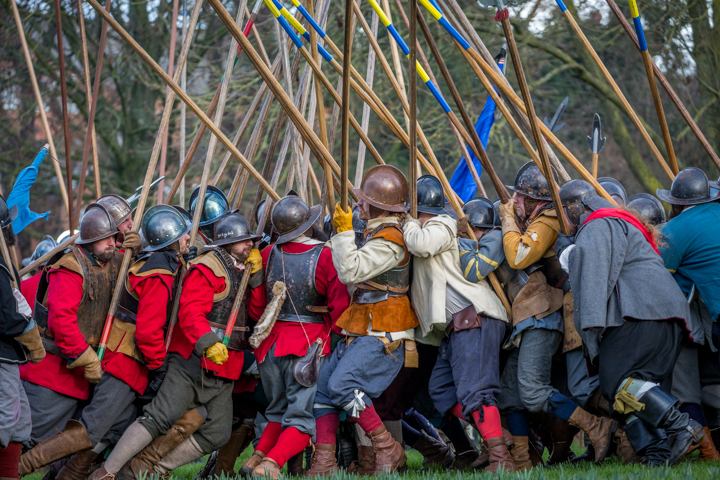 Central to the Battle itself, was the village of Acton, on the western side of Nantwich town. The name Acton actually derives from the word ‘actune’, meaning “Oak Town”, which given Acton’s close proximity to the surrounding countryside and in particular, Delamere Forest, is a rather apt name. Acton gets a mention in the Domesday Book, when it was held by Earl Morcar, before the Norman Conquest and afterwards by William Malbank, the first baron of Malbank. The name Malbank still has strong associations within the town of Nantwich, the local Secondary School is named after Baron Malbank and the local pub is named The Malbank, so there are historical connections everywhere. Purely for research purposes, I had to frequent the Malbank to ensure the Historical accuracy of the blog! The actual church at Acton, St. Mary’s, or the site on which the current church stands, also gets a mention in the Domesday Book and there has been a Church on the site since 1086. The church tower is the oldest in Cheshire, having been built in 1180. At the time it was built, the tower reached 100 feet, but in 1757, part of the original tower fell and it had to rebuilt, however, the rebuilt tower was only built to a height of 80 feet. There is History literally on every corner and everywhere you turn in Nantwich, plus there are plenty of historical pubs!

Acton became firmly entrenched in English History during The English Civil War which took place between 1642 and 1651 and created a divide within the Country between the Parliamentarians (Roundheads) and the Royalists (Cavaliers), who were loyal to the then reigning King, Charles I. The wars centred around how the Country was to be governed and also the role of the church within the Countries governance. In the political conflict leading up to the war, the vast majority supported the institution of a monarchy, but disagreed on who held ultimate authority. Royalists generally supported the control by Charles I, over Parliament, while their Parliamentarian opponents backed constitutional monarchy. However, this over simplifies a very complex situation; many tried to avoid taking sides or went to war with great reluctance and individual choices often came down to personal loyalties. Like many wars over the centuries, land boundaries and religion are at the centre of the battleground, nothing much has changed has it? Because of its close proximity to Chester and easy access to the River Dee, Nantwich became a key strategic point for both armies and during the civil war the village of Acton was taken several times. The key figures on both sides were Lord Byron, leading the Royalist Army and Sir Thomas Fairfax leading the Parliamentarians. 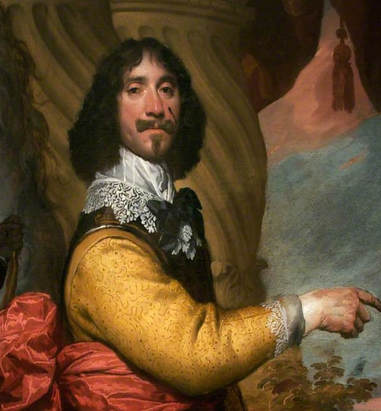 So who were these two men who were to ultimately decide the future of the English Monarchy and how the Country was to be governed going forwards? Sir Thomas Fairfax was an English politician, General and Parliamentary commander-in-chief during the English Civil War. He was an adept and talented commander and led the Parliamentarians to many victories and became effectively military ruler of England. His opposite protagonist was Lord Byron, an English nobleman, Royalist, politician, peer, knight, and supporter of Charles I. When the Civil War started, he joined the King at York and was engaged on the Royalists’ cause throughout the Civil Wars and afterwards, becoming commander of the Royalist forces in Lancashire and Cheshire. I can think of a few Politicians in recent history who you could compare to these two figures, but I will let you make your own mind up with that one!

So onto the Battle itself, just prior to the actual Battle, the Royalist Army had taken a stranglehold on most of the North West Region of England and Nantwich was the last remaining Parliamentarian stronghold. By the end of 1643 the parliamentary garrison was under siege at Nantwich from the Royalist army. With word reaching Sir Thomas Fairfax of the dire position his Parliamentarian forces were under in the North West, he marched a 5,000 strong army from Lincolnshire on the East Coast, across the pennines in the middle of winter, to assist his fellow Parliamentarians who were held under siege at Nantwich. At the time the Royalist forces were using the village church of St. Mary’s as their base and if you ever get the chance to visit the church, there is still evidence today of the battle in the form of musket shots which are still clearly visible today (see the image below). I should also point out that it’s rather unusual for armies to go to battle in mid winter and the weather was to play a major role in stalling the Royalists army. If you are familiar with the Cheshire area, or if you wanted to familiarise yourself with the route they marched, the Parliamentarians marched the final stretch into Nantwich along what today we recognise as the A51. 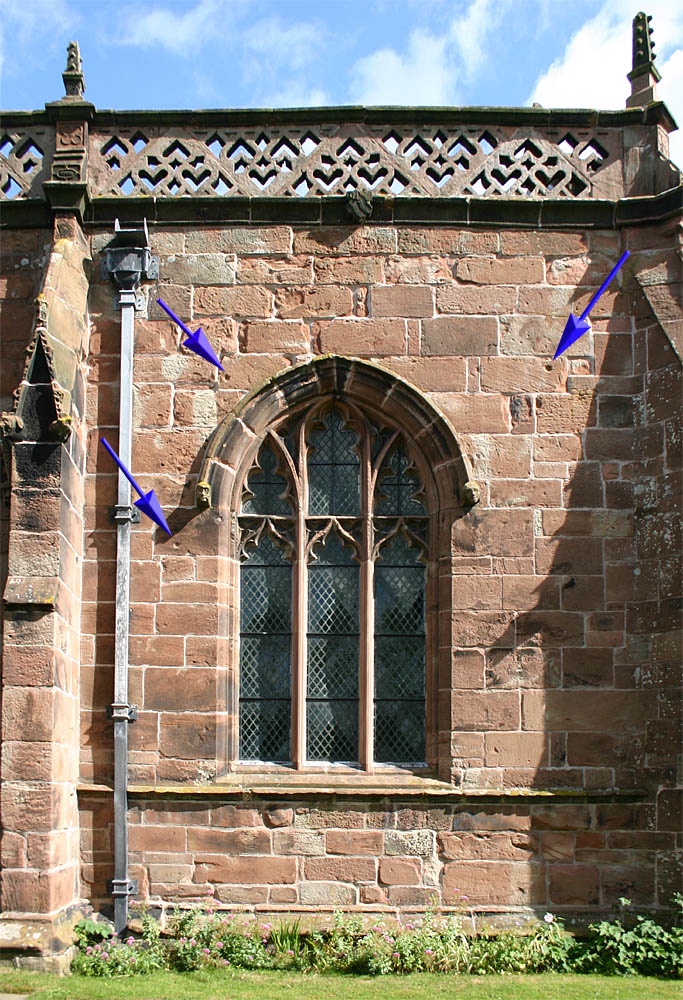 The Parliamentarians garrison numbered approximately 2,000 men under the control of Colonel George Booth and they were well and truly hankered in and well supplied and were there for ‘the long game’. When you look back at many Historical Battles, both on land and at sea, the weather can have a real effect on the outcome and in the case of the Battle of Nantwich, the weather was to have a devastating affect on the outcome of the Battle and worked completely in the favour of The Parliamentarians.

At the time of the Battle, the ground was heavily covered in snow and there are various online resources that give a clear indication that the winter of 1643/44 was a particularly cold and snowy winter and in January 1644 there were 8 consecutive days of snowfall, followed by a rapid thaw, which played directly into the hands of The Parliamentarians. The location of Nantwich and Acton being adjacent to the River Weaver, also played a major part in the final outcome of the ensuing battle.

At the time, Nantwich was little more than a large village, spread either side of the River Weaver and the Parliamentarians held the Chester Road Bridge in the town, but the Beam Bridge, about 0.5 miles to the north, was open and available to the Royalists. Byron’s headquarters were at Acton, about 1 mile to the west of Nantwich. His regiments were quartered in a circle around the town sheltering where they could in a countryside covered in snow. The key positions of the bridges and the overnight thaw played a key role on the day of the battle itself.

The two google maps images below will hopefully give you some perspective of the locations of the key areas, the first map shows Nantwich itself with Acton and St. Mary’s Church located on the left hand side, Beam Bridge is in the centre straddling the River Weaver. The second map shows how far away the bridge is located at Minshull Vernon. 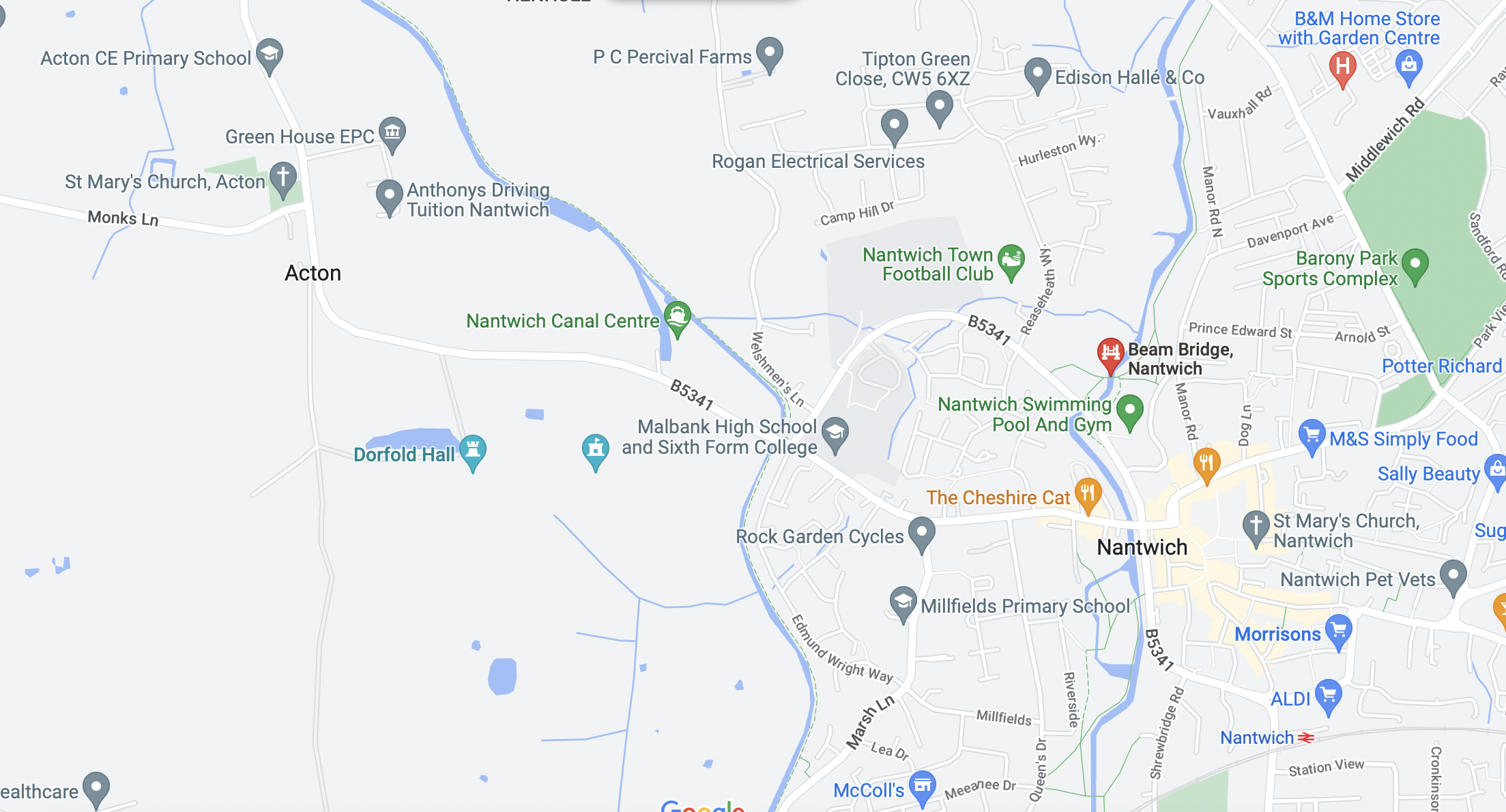 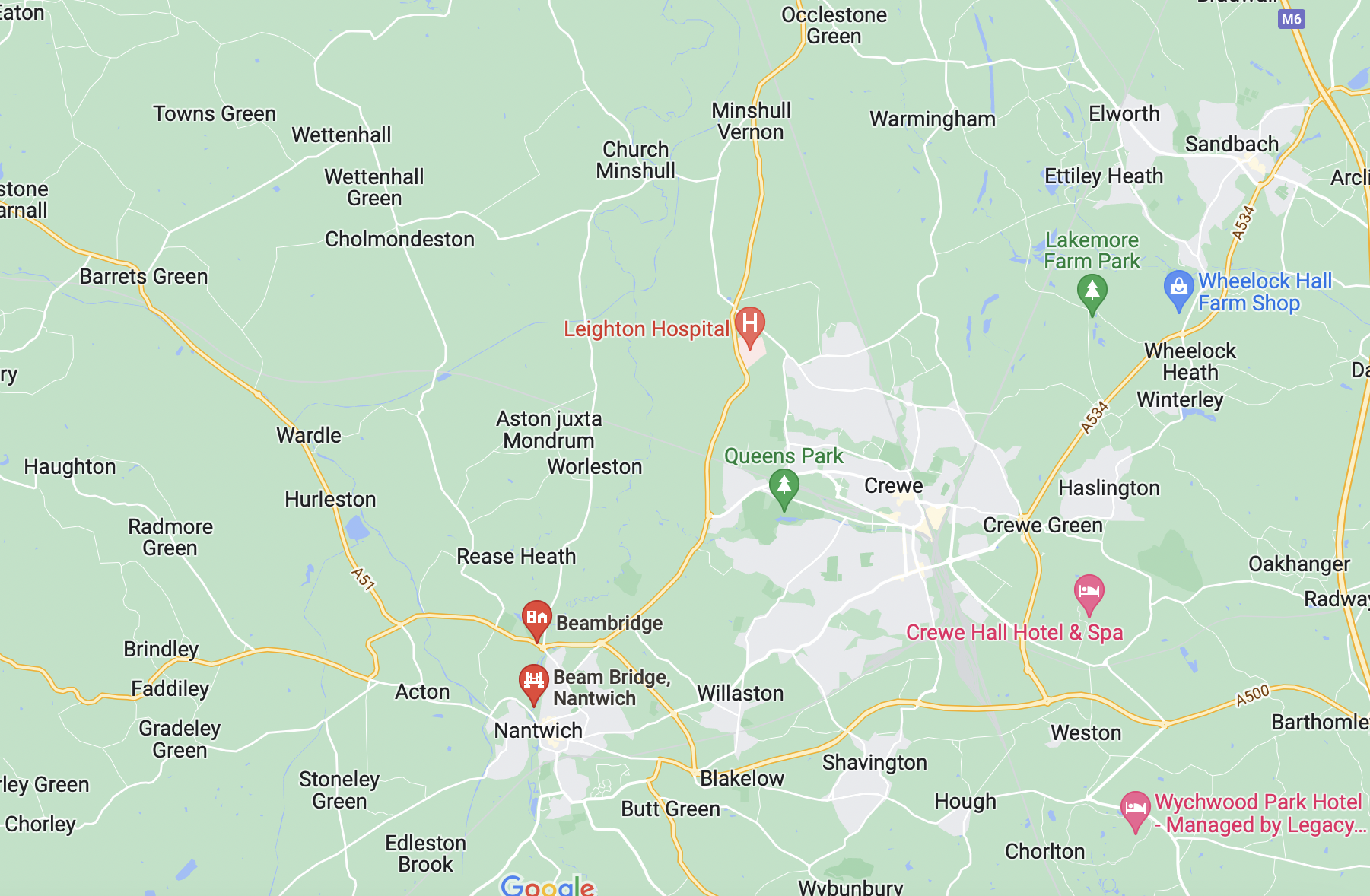 On the day of the battle, on 25th January 1844 , there was a sudden thaw which caused the River Weaver to rise rapidly and burst its banks, which turned the surrounding countryside into a quagmire. Byron ordered his infantry and artillery to move to the west bank of the Weaver, around Acton, where the ground was drier, which turned out to be a foolish move. The Royalist army was suddenly split in two when the Beam Bridge was swept away by the floodwater, which left Byron and his cavalry force of 1,800 stranded on the east bank. He was then forced to march his army 6 miles on foot, to another bridge at Minshull Vernon, to support his infantry at Acton. With Byron stranded, his fellow Royalists on the western side of the river surrounded Acton church, four regiments deployed to block the road from the north along which Fairfax was marching, and another to cover the approach into Nantwich itself. News reached Fairfax that Byron’s cavalry was approaching, so he sent two regiments to hold the Royalists at bay and continued his advance towards Acton, his plan was to defeat the Royalist infantry at Acton before the cavalry arrived to reinforce them. The Royalists manage to hold off the first Parliamentarian attack, commanded by Thomas Fairfax’s cousin, William Fairfax. Byron’s men were still struggling to overcome the boggy conditions caused by the flood and therefore when a second wave of attack from the Parliamentarians came, the Royalists began to fall. The Royalists fell back to Acton church where they surrendered too Fairfax. Many Royalist soldiers defected to the Parliamentarians, the remainder surrendered or fled and around 1,500 were taken prisoner. You have to remember that although the Church was still a Church, the Church and surrounding buildings were being used as a garrison stronghold by the Parliamentarians. After the Battle “the Church was cleaned from pollution and beastliness committed by them and all the matties and bosses were burned and all the pewes and seates made clayne and washed”. The Church commenced services again on 4 February 1644. 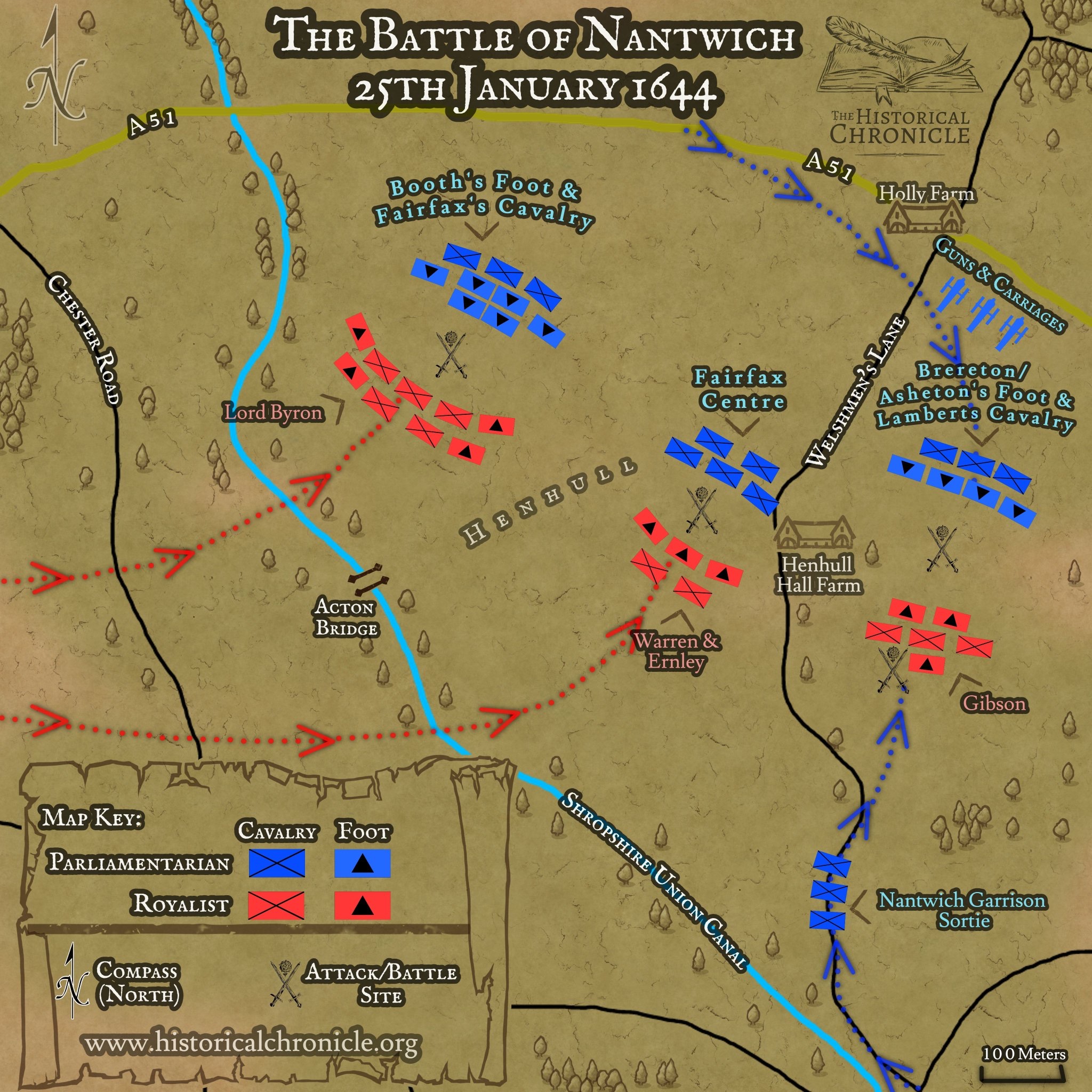 The defeat at Nantwich thwarted King Charles’s plans and It was a substantial victory for the Parliamentarians. I often stop and think about what History would have looked like had the results of such Battles and Wars turned out differently? Imagine if we lost to the Spanish Armada, or lost the Battle of Waterloo, bringing it forward to recent years, what about the two World Wars? I wonder if King Charles I would have avoided his execution in 1649 had his troops been victorious at the Battle of Nantwich? One of those History questions we will never know the answer to. Charles I was found guilty of being ‘a tyrant, traitor, murderer and public enemy to the Commonwealth of England and sentenced to be put to death by the severing of his head from his body…………Just think had there not been a large thawing of snow. overnight at Nantwich, Charles I might have reigned just a little bit longer!

There is an annual re-enactment of the Battle of Nantwich by The Sealed Knot, on the nearest Saturday to 25 January. The commemorative day of the battle is celebrated locally as “Holly Holy Day”. This is a major event in the Nantwich calendar which attracts thousands of visitors to watch the re-enactment.

Below are some pictures from previous years: 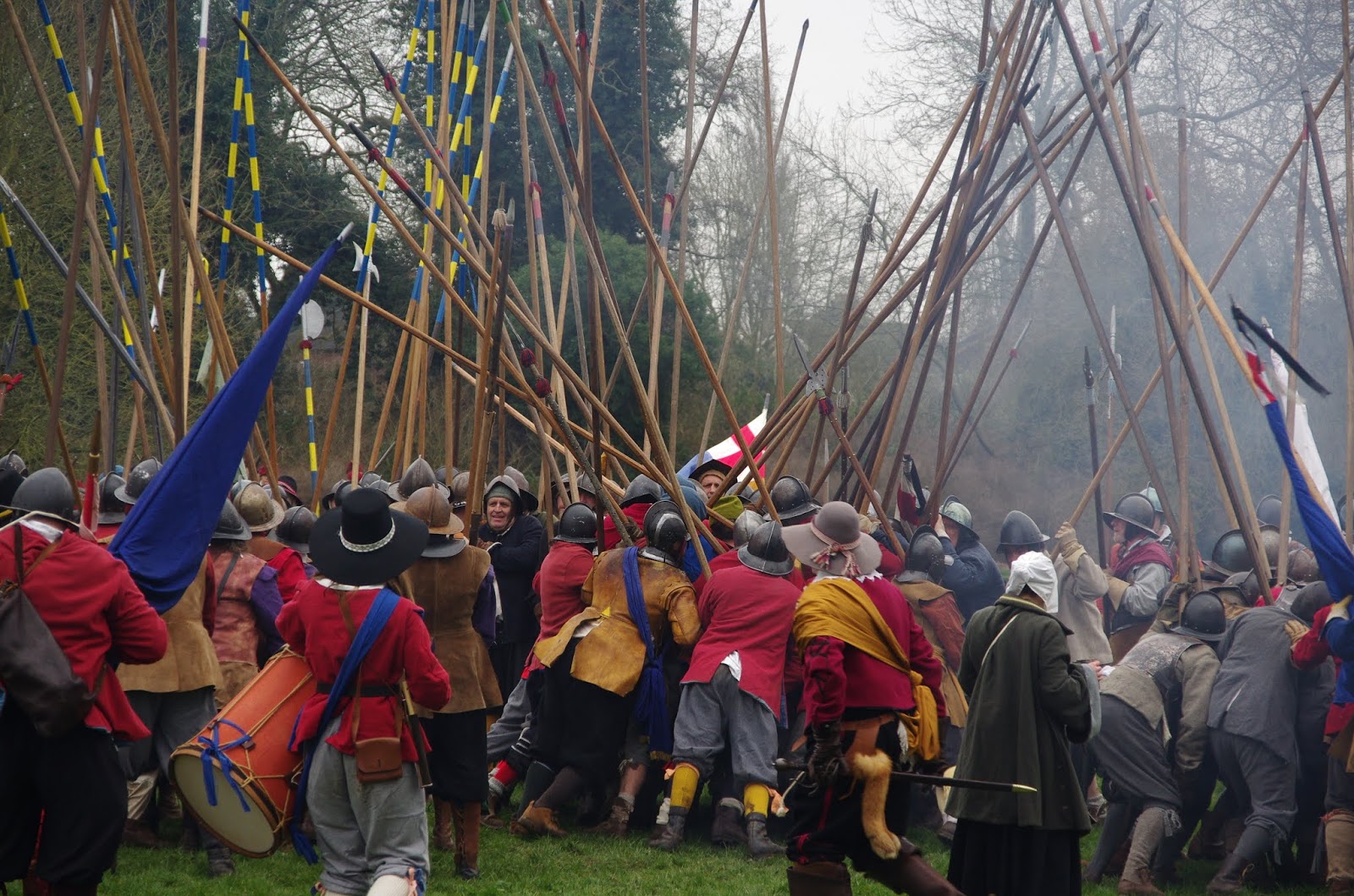 One thought on “The Battle of Nantwich”