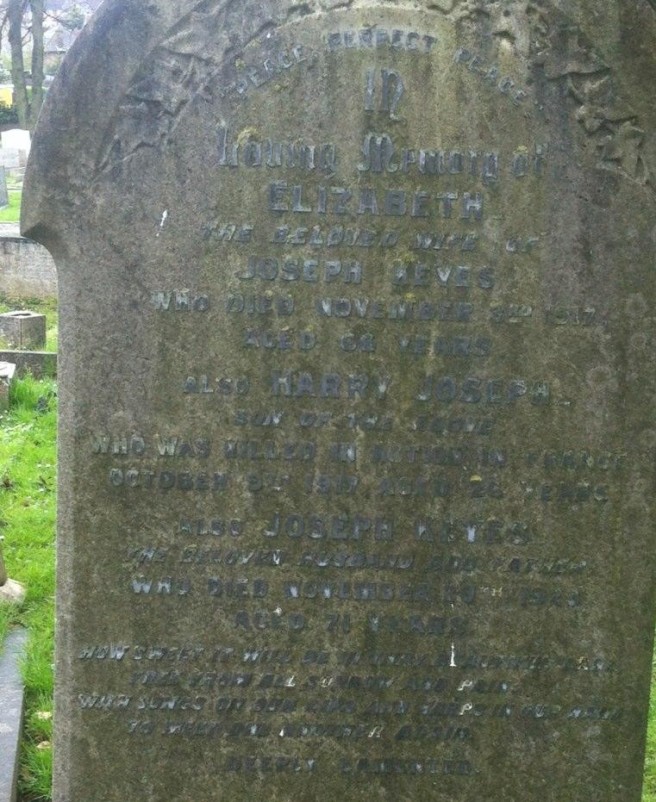 Young Harry sadly lost his life, aged just 23 at the 3rd Battle of Ypres, known as Paasschendaele. I will try and give some background information about Harry’s early life, before giving the details surrounding his Army career and the circumstances leading up to his loss of life on 9th October 1917.

In 1901 young Harry was counted with the rest of his family and was living at 26, Prospect Place, Grays, Essex. His father was employed as a cement labourer; the cement industry was a major employer in the Thurrock area at that time.

I have no record of young Harry’s school record, so cannot make any assumptions or judgements about his schooling.

The next mention of Harry is the 1911 census, by this time Harry is aged approx. 19 years and like his father before him, he was employed in the local cement industry as a labourer. By this time Harry’s ageing father had reduced his working duties to that of a nightwatchman. At the time the family home was 57, Stanley Road, Grays, Essex.

The outbreak of WW1 in 1914 was to shape the Keyes family life forever as it did for millions of families.

From Harry Joseph Keyes Army record I was able to ascertain the following information about his Army Career, where he served and where he sadly lost his life.

The Battalion movements for Harry Joseph Keyes are as follows:

Pte Keyes was in a draft of TF soldiers from the Essex Regiment who went to France on the 16th June 1917 and who were originally posted to the 10th Essex Regiment, ‘for record purposes’ at 15 IBD Calais.  They were posted to the 1/4 Gloucestershire Regiment on 7 July 1917, joining the Battalion in the field on the 10th July. 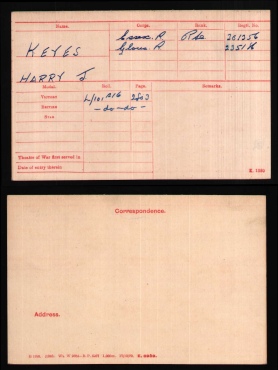 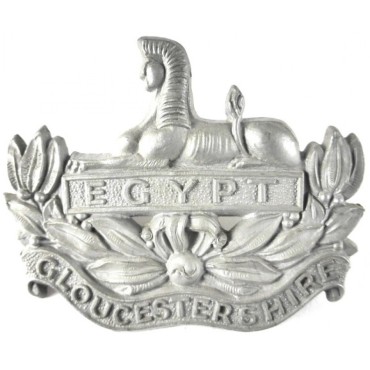 The war diary of the 1/4th Bn. shows the Battalion was in Camp from the 10th to the 31st July and during this period recorded ‘Reinforcements O.R. 280’.

Looking at his military record, his medal index card, a free download on Ancestry, shows he is entitled to the British War Medal and Victory Medal, this means he did not go on active service until after 31st December 1915.  Only the six digit number is shown on the card so we know he did not go overseas until after the TF was renumbered on or around March 1917.  Therefore the earliest he was in theatre was after March/April 1917.

Then we look at the medals rolls, some rolls are in numerical order which means a block of men with the same number(s) in series can be readily identified, unfortunately the Gloucesters lists are alphabetical so not much help, but they do tell us he was in the 10th Essex Regiment and the 1/4th Gloucester Regiment.

You then have to do wildcard ** searches for men with similar numbers and who were not from Bristol , and I found about half a dozen who were in the 3/7th TF Battalion who went to France as above and arrived at the IBD at Calais  e.g. 235167 William Mold (ideally we now want to find someone 235187 or above but none is apparent in the surviving records so back to the Rolls and we find 235188 Deal 10th Essex etc and 235189 Garrett.  They seldom split drafts, though sometimes they did, but on the balance of probability we can say Pte Keyes was one of those renumbered on posting to the Gloucestershire Regiment on the date shown when the war diary confirms a large draft joined the Battalion.  The posting to the 10th Essex was administrative and they did not go on active service with that Battalion.

There is no real connection between the 3/7th Essex Regiment and the 1/4 Gloucestershire other than the fact they were both TF units, it is simply down to the fact that on arrival in France at the IBD, after a brief period of further training in trench warfare, men were sent where they were most needed.

Soldiers Who Died in The Great War shows he was numbered 4901 to the Essex Regiment and he enlisted at Grays. If we go to Soldier’s Effects on Ancestry we can see his father Joseph, received a gratuity of £7 which means he enlisted March 1916.  Given his age and single status this date means he was either conscripted or, enlisted under the Derby Scheme.  If the latter he would be in Group 7 mobilisation date 8 February 1916, though this was staggered.

On the day that Harry Joseph Keyes sadly lost his life, the following War Diary entry was made:

The plan for moving the Bn to jumping off position was as follows:

The 2nd in Command went on an hour in advance of the Bn with 3 NCO’s per Coy, this party was to lay out the tape lines 50 yards and 200 yards behind Country Cross Roads and then to return to Tweed House to guide the Bn in. The Bn was to move up by Albert Track and then along the Poelcappelle Road to U.30.d.63.80, where they were to have been met by Bucks Bn guides, who would guide them to Tweed House by the taped track via Bavaroise House.

On arrival at U.30.d.63.80 Lt-Col. Crosskey found that the guides were not there and after waiting for a time decided that he would turn about and move up via the Trench board track and Hubner Farm, a route which he knew himself to some extent. This he did and arrived at Tweed House about 1.45 am. But then found that the 3 rear Coys and 1 platoon of the leading one had lost touch. Bn HQ runners were sent out to look for them and ‘C’ Coy (the leading one) was guided down to the jumping-off point. At about 4.30 am ‘A’, ‘B’ and 2 platoons of ‘D’ Coy were brought to Tweed House and taken to the jumping-off point. These Coys were just forming up along the tape when our barrage came down.

Immediately the advance commenced our men came under MG fire from the cemetery in V.26.d and guns in a breastwork in front of Oxford Houses at V.26.b.33.45 and a MG about V.26.a.97.60. Snipers were also very active from the large hedge south of the road in V.26.b, Oxford Houses, Beek Houses and other points North of Lekkerboterbeek.

The bulk of our men were held up approx. on a line 150 yards East of County Cross Roads, but a party of 1 officer and 6 men, the remains of a platoon, pushed on as far as V.26.b.40.15. Another small party under a Sergeant got into the enclosure about Oxford Houses and fortified a shell hole at V.26.b.25.40. Another party under a Sergeant dug in about V.26.b.05.50. No advance appeared to be made on our left so ‘C’ Coy formed a defensive flank facing North with 3 posts and 1 Lewis Gun.

The MG in the cemetery was silenced almost at once by the 6th Glosters and a number of Germans retiring North East of the cemetery came under Lewis Gun fire and rifle fire and suffered casualties.

There was a lot of movement during the day between the Mebus and the enemy post at V.26.b.60.25. This was always fired at and numerous casualties caused. The MG’s in the breastwork about V.26.b.33.45 were dealt with by rifle grenades and during the morning the morning some enemy doubled round the back of Oxford Houses and returned with a light MG. The MG at V.26.b.97.60 was also dealt with by rifle grenades.

What happened during the 5 pm attack will be dealt with by the OC 1/8th Worcesters. The party in Oxford Houses enclosure report that they were 50 yard in front of the barrage. It was this barrage which made the officer and NCO’s commanding Coys in the line decide to retire and consolidate after dark 100 yards in rear of their present positions.

Very few messages were received back from the line after the attack, owing chiefly to the fact that most of the officers became casualties and also heavy sniping made movement very difficult. This also hindered the collection of casualties, the Germans sniped a great deal at our stretcher-bearers on the 9th. On the 10th they left them alone probably because large enemy stretcher parties were out collecting their wounded under the Red Cross Flag. 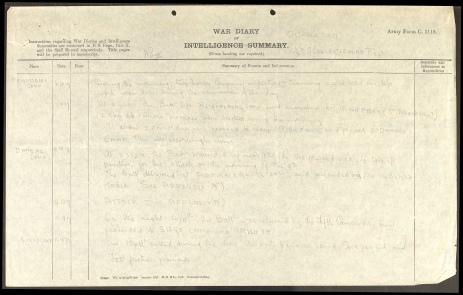 Special thanks to the contributors of the Great War Forum for their help with some of the Military factual information.