This is the seventh in my series of eight blogs telling the life stories of my eight great-grandparents, next up is the wonderfully talented William Tom Wootton.

William Tom Wootton was born on 28th May 1863 to Thomas Wootton and Nicolina Elizabeth Wootton nee Stampa, he was their only child and was born at 106, Carlton Road, Kentish Town, London. A Quick look at Kentish Town around that time and I am unable to find the location, Carlton Road, there is however a Carlton Street which I presume is the right address and maybe just a transcribing error.

Nicolina’s Father was Dominic Stampa and he was born in Como, in Italy before he emigrated to Edinburgh in Scotland. The birth was registered by his mother, Nicolina, on the 30th June 1863. This was Nicolina’s second marriage, she had previously been married to a William MacDonald and had three children from this Marriage, who were half siblings to William Tom Wootton.

William Tom Wootton is living in the family home of 9, Platt Street, London by the time of the 1871 census. Also present at the family home were William Tom’s parents, Thomas and Nicolina, along with her two daughters from her first marriage, Mary MacDonald and Willimina Louisa MacDonald along with Nicolina’s older sister Caroline Stampa.

By the 1881 census the family had moved to 23, Hadley Street, St. Pancras and young William Tom Wootton was making his way in the world and working as a Lead Glazier. Also at home at the time were his parents, Thomas Wootton and Nicolina Wootton, William’s half sister Mary MacDonald and Nicolina’s sister Nancy Stampa.

William’s first Marriage was to Elizabeth Ellen Compton on 31st December 1886. At the time of their Marriage they were both 23 years of age. William Tom Wootton’s occupation is listed as a Lead Glazier. 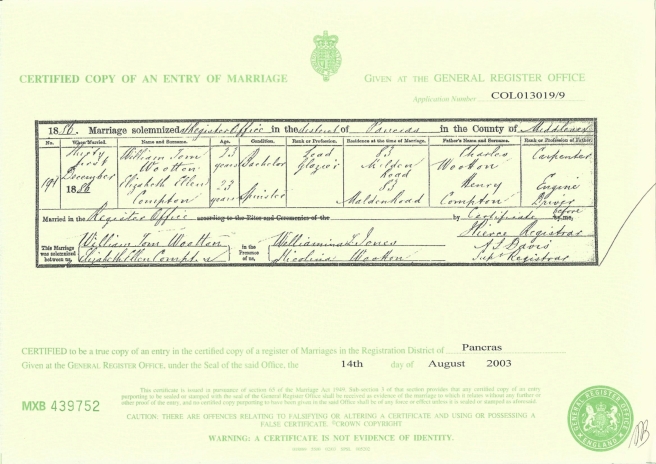 William was living at the same address as Ellen Compton at the time of their Marriage, 83, Malden Road, Maitland Park, St. Pancras. Their Marriage was witnessed by William’s Mother Nicolina Wootton and William’s half sister Williamina Louisa Jones.

There is a slight discrepancy in the information recorded at the time of the Marriage. William Tom’s Father was recorded as Charles Wootton a carpenter, whereas in actual fact his Father was Thomas Wootton, carpenter.

During this period William Tom Wootton was counted in the 1891 census as living at 14, Banbury Road, Watford, Herts, his occupation is listed as a Stained Glass Glazier. One can only presume that William’s occupation as a Lead Glazier had taken the family to Watford in the pursuit of work. Between 1891 and 1892, around the time of the birth of their Daughter Louisa Elsie Mabel Wootton, the family move far away from London and are now living in Portsea, Hampshire. Louisa, Albert, Frederick and Harold are all born in Portsea, Hampshire.

It was the birth of their seventh child, Harold that was to have a devastating effect on the family as sadly Elizabeth died during childbirth. Elizabeth Ellen Wootton died on 23rd March 1898 at 38 Hawke Street, Portsea, she was just 34 years old. The cause of Death was Phthsis and Exhaustion, the informant was William Tom Wootton a Lead Glazier (Journeyman), who was present at the death.

Just over a year later, William Tom Wootton married his second wife, Emily Dodd on 5th August 1899 at The Register Office, St. Pancras. By this time William Tom Wootton was living at 65, Mansfield Road, London, his occupation is listed as a Stained Glass Painter. Emily Dodd was a spinster and living at 1, Thomas Street, Stepney. Witness at the wedding, once again, was Williamina Louisa Jones.

By the 1901 Census, William Tom is living at 20, Roseberry Gardens, Tottenham, his occupation is listed as Lead Glazier and Glass Cutter and he is at home with his wife Emily and children, Thomas Wootton, William Wootton, Frederick Wootton, and Doris Wootton.

During this time the Wootton family moved from their home in Tottenham to Poplar in the East End of London, they were residing at 6, Bentley Terrace, Poplar London in the 1911 census with seven of their children at home and William Tom’s occupation was still a Stained Glass Lead Glazier. The family lived in Bentley Terrace for a number of years as confirmed by the Electoral Registers, before moving to 15, Tetley Street, Poplar by the time of the 1939 Register. William Tom’s occupation is a Stained Glass Lead Glazier. 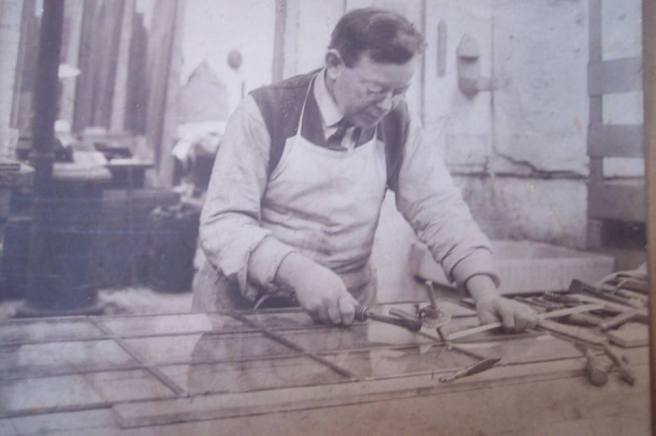 William had a great interest in music and amazing musical ability, including the ability to be able play numerous musical instruments, he said he could play anything from a comb and tissue paper to an organ. He was so keen to play music that he used to eat his meals whilst playing the piano. When he was short of work as a Lead Glazier he used to busk with a Trumpet, he also wrote his own music and family folklore has it that he actually wrote the songs “Any Old Iron”, “Boiled Beef and Carrots” and “I’m Henry the Eighty I am” and sold them down the pub for 1/-. I am unlikely to ever be able to prove or disprove the story, but it all adds to the character that was William Tom Wootton.

William Tom Wootton was also a born entertainer and he had a Punch & Judy show on the beach at Southend, he also entertained his own children and grandchildren at home with Punch and Judy shows. His work as a Lead Glazier took him around the Country and we know from oral testimony, that he worked on two significant pieces of work, the restoration of The Five Sisters Window at York Minster and also some work on Salisbury Cathedral.

He also worked on stained glass in state dining rooms including luxury liners, which is why he moved the family to Portsmouth. His signature on glass was a W over an inverted W with a horizontal line between them, this was in the bottom corner of all his pieces of work. 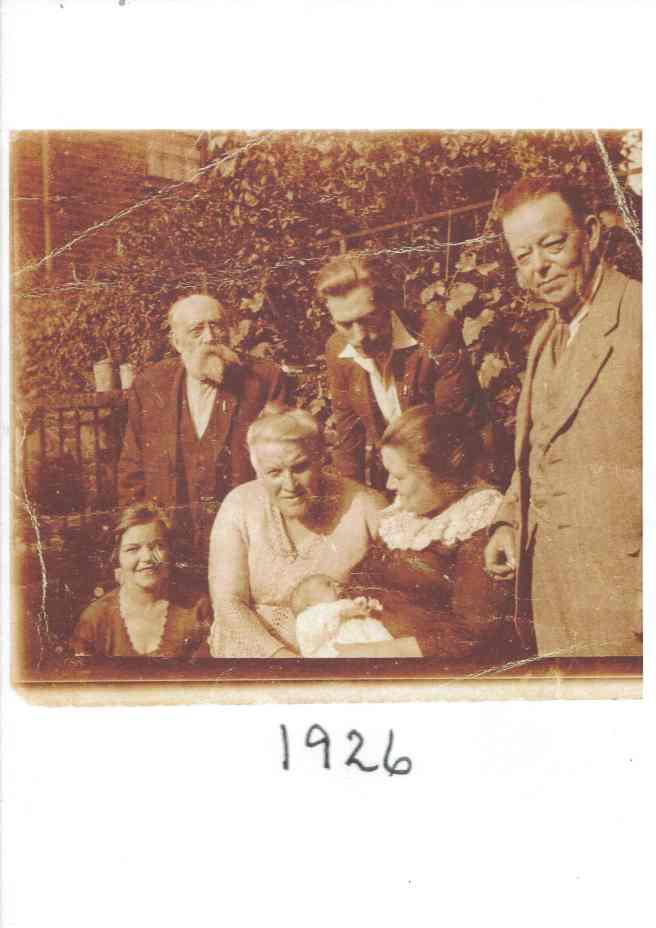 Sadly William Tom Wootton died on 8th February 1951, aged 87, at 3, Grays Hall Cottages, Grays, Essex. He died from cerebral thrombosis, his death was recorded by his son and my Grandfather, Edward Tom Wootton, who was living next door at the time. He was buried at Stifford Church, North Stifford, Essex, Grave Number 119.

The census returns for William Tom Wootton can be found here;

One thought on “The Life and Times of William Tom Wootton”