This is the eighth in my new series of blogs, telling the life stories of my 2 x Great Grand parents and next up is John Daniels.

In my last blog I wrote about the sad life of Emma Sophia Lukes and I mentioned about an instinct that we can get about a particular Ancestor, almost a gut feeling, something that the records might not always particularly reflect, this time my instinct tells me that my Great Great Grandfather John Daniels was not a very nice man!

John Daniels was born on 6th February 1846, the oldest child born to John Vincent Daniels and Elizabeth Kearney. John was born right slap bang in the middle of a piece of Irish History, The Irish Potato Famine (1845-1849). Young John’s Father, John Vincent Daniels was born in Kells, County Meath and his Mother, Elizabeth Kearney was Born in Tipperary. What drew them to the City of Dublin, we will never know for sure, was it the Famine, more than likely or was it merely looking for work, either way the young Married couple chose to head for Dublin City.

John Daniels was Baptised at Church of St. John the Evangelist, Dublin (Church of Ireland), on 1st March 1846 and at the time the family home was 7, John’s Lane, Dublin, at the time John’s Father, John Vincent Daniel was employed as a Stucco Plasterer. A Stucco Plasterer was different from a conventional Plasterer in the sense that a Stucco Plasterer worked on outside walls and ornamental mouldings on buildings, especially Churches, whereas a conventional plasterer worked on interior walls and ceilings, think more like flat surfaces rather than mouldings or sculptings. A large percentage of Stucco plasterers had origins from Italy and this could be the reason for my ethnicity result in my DNA test, showing up as 15% Italian ethnicity. However I am unable to determine at the moment if my Daniels had any connections to Italy. They could of Course have learnt their trade from trained Italian Master Craftsman.

Because Irish records are notoriously difficult to find, there is a large gap in the early part of John Daniels life, until his Marriage in 1885, although I cannot prove it, my suspicion is that he was married before this Marriage in 1885, but like many parts of Family History, it’s not fact until you can prove it! 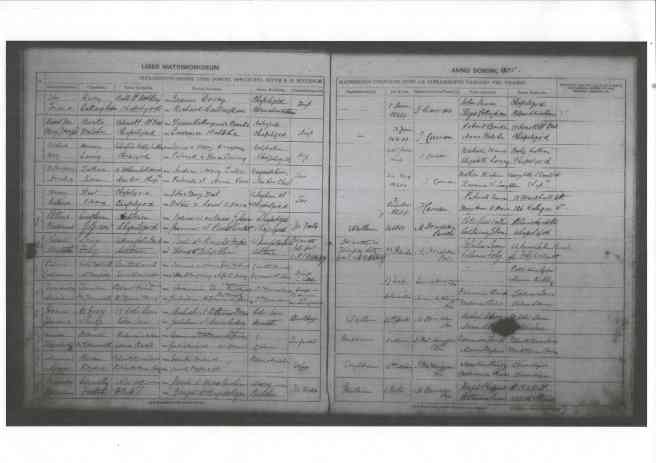 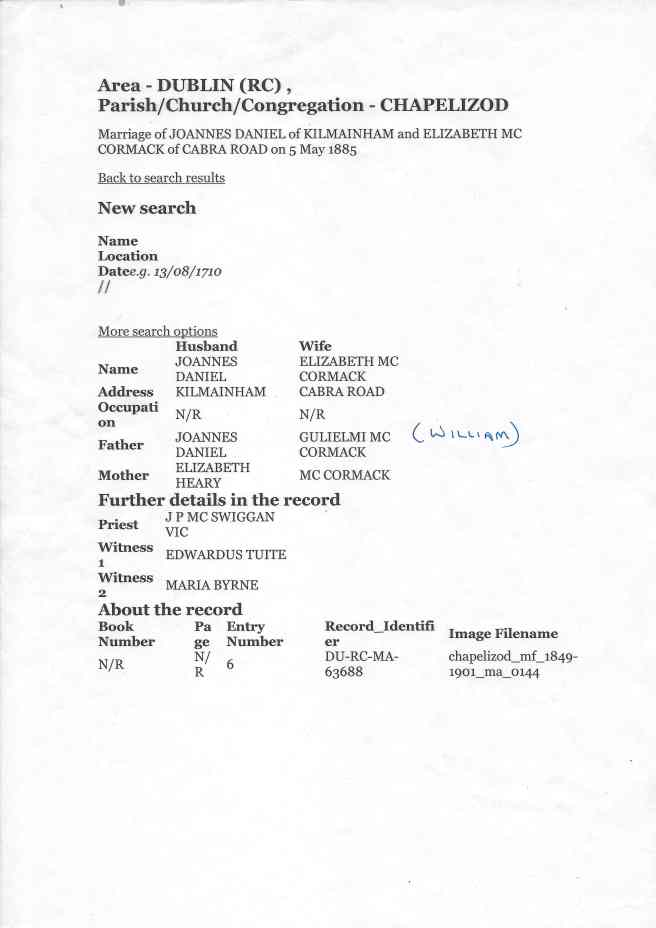 It was just after the birth of their last child, William, that I discovered records that showed how difficult life and times were, for the Daniels family and how they would take an even darker turn for the Daniels Children.

Between the years 1897 and 1905 there are 8 separate entires for John Daniels in the South Dublin Workhouse, plus numerous separate entries for John Daniels wife, Lizzie and the Children. There are various addresses listed in the records including Island Bridge and 3, Woodroffes Cottages all in the Island Bridge and Kilmainham ares of Dublin. The interesting part is that they are separate entries from each other, Lizzie his wife, is listed on 14 separate occasions with the children and John is listed on 8 separate occasions alone. Were they separated at this stage? Difficult to say for sure. 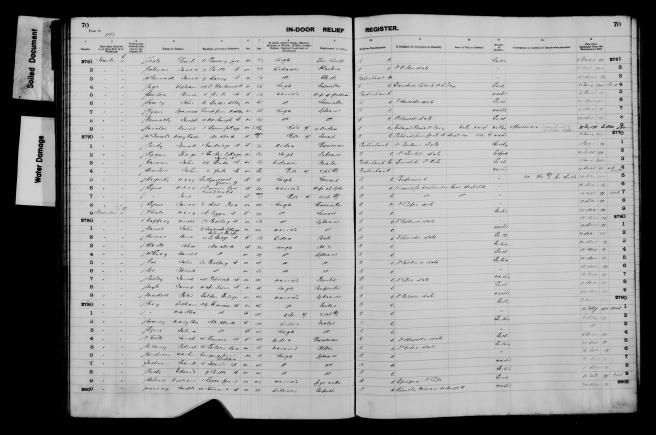 (A Typical example of a Workhouse Record for John Daniels)

The darker side was that in 1902, John aged 54, was sent to Mountjoy prison and sentenced to two months imprisonment for ill treating his children. His last residence is listed as Summers Cottages, Kilmainham. His wife is listed as Lizzie and her address given as Woodroffes Cottages, Island Bridge. John’s birthplace is listed as John’s Lane. At the time John was listed as 4ft 11 3/4″ tall with brown hair and green eyes. My Initial thoughts were that ‘ill treating his children’ meant by physical means, but having discussed this with “Genie Friends”, it could also mean abandonment and neglect, but one would expect to see terms such as ‘neglect’ or ‘desertion’ in a charge, rather than ‘ill treating’. Further evidence of similar cases at the time, shows evidence of terms such as ‘neglect’ and ‘failing to pay maintenance’, so my first suspician of physically ill treating his children, could actually be sadly correct.

Prior to his Death, John was also admitted to Stevens Hospital in 1904 with Bronchitis.

Sadly John Daniels died on 13th April 1906 in The Dublin Workhouse, the cause of Death being Bronchitis. 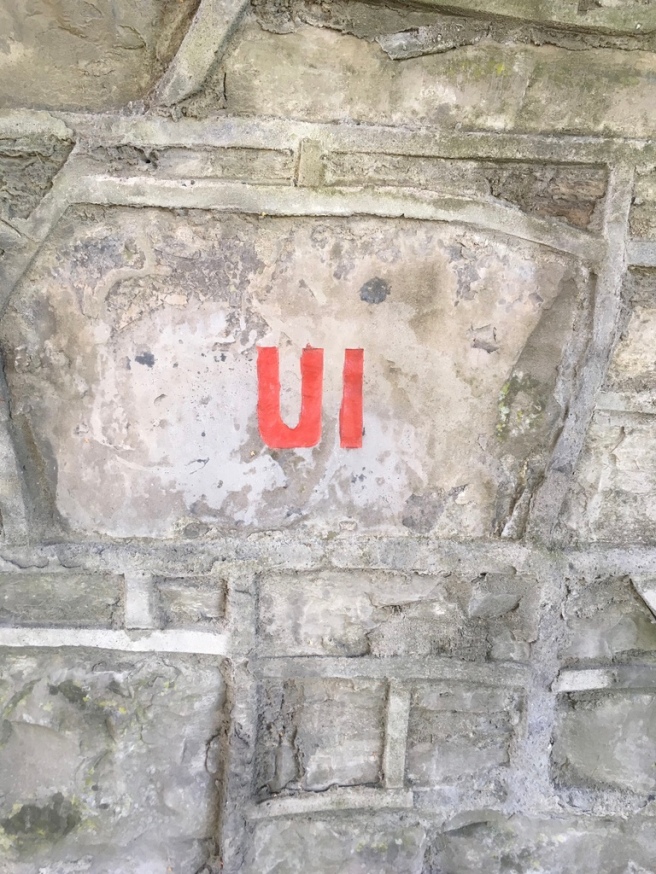 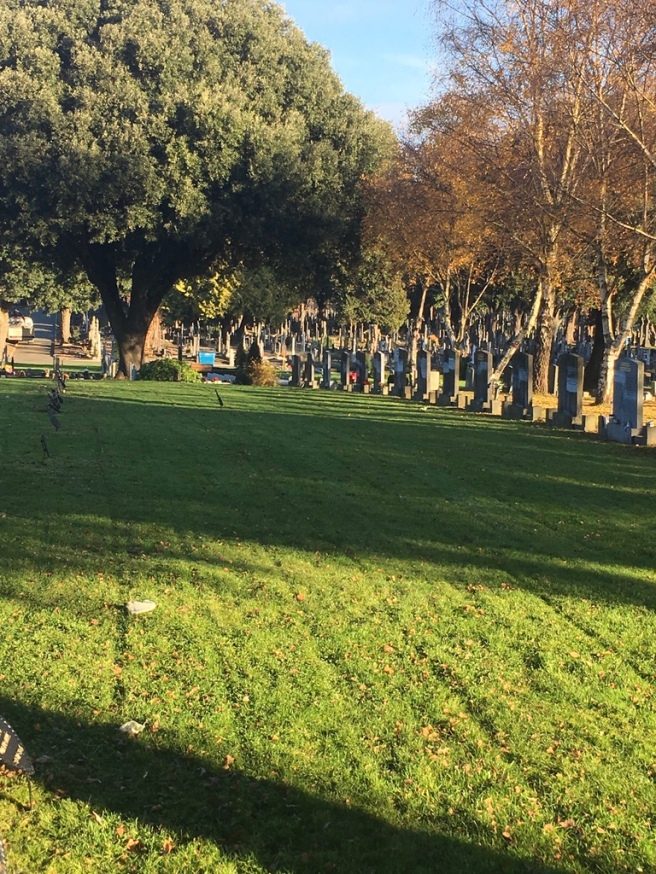 (Approximate are of John Daniels Burial – from my collection)

I visited Dublin twice to research my Daniels Family History and I visited Glasnevin Cemetery and although there is no grave marker to identify where John Daniels was buried, I was able to work out approximately where his final resting place was.

I think that times were extremely harsh and tough for John and his Family, like they were for a lot of families in the city of Dublin. Was John Daniels a decent man or maybe not such a nice man after all, or was he like many, a victim of the circumstances around him? Somehow I have my doubts…….

9 thoughts on “The Life and Times of John Daniels”