Welcome to the ninth in my series of blogs, telling the stories of my 16 x Great Grandparents, so let me introduce Thomas Wootton. Thomas is one of the more interesting characters on my tree, so sit back and enjoy Thomas’s story.

Thomas was eldest Son of eight children, born to William Wootton and Mary Wootton, nee Davis and he was born 28th February 1839 in the Village of Peterchurch in Madley in Herefordshire. Thomas comes in a long line of  ‘Thomas Wootton’s and you can read about my long line of 10 x Thomas Wootton’s Here

Thomas was Baptised on 3rd March 1839 at Mansell Gamage, Peterchurch in Herefordshire.

Thomas is counted in the 1841 Census living at the Family home ‘Falls Brook’ in Byford, Weobley in Herefordshire and is living with his parents, William Wootton and Mary Wootton, also living at the family home is a John Davis, Brother of Mary Davis. Thomas’s Father, William is listed as a Cooper. 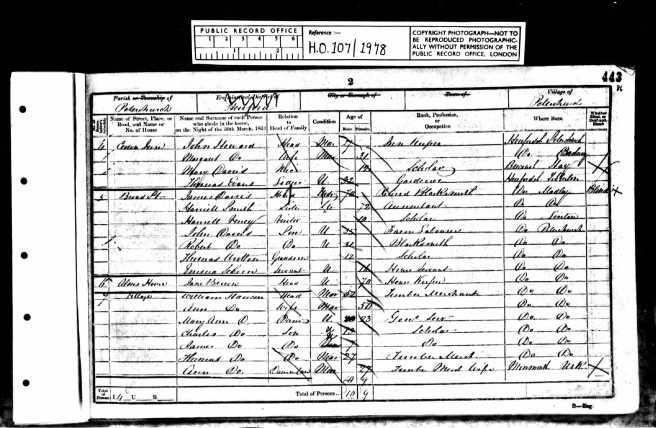 The 1851 Census is an interesting one, as Thomas is not listed as being at home on the census night, this time Thomas is at the home of his Grandfather, James Davis, at 5 Broad Street, Peterchurch and there are also a number of other occupants at the home on Census night. James Davis’ Sister, Harriet Smith is also counted, along with visitor Harriet Berry, James Davis’ two Sons, Robert Davis and John Davies, as well as Servant Emma Seborn. Thomas’s Grandfather, James Davis is listed as a Retired Blacksmith. Thomas’s parents, William and Mary Wootton are counted in the 1851 Census at living at the Family home called ‘Townsend’, which was to remain the Family home for many more years. Why Thomas is not with his parents and siblings at the time we cannot say, possibly he was just visiting his Grandfather. 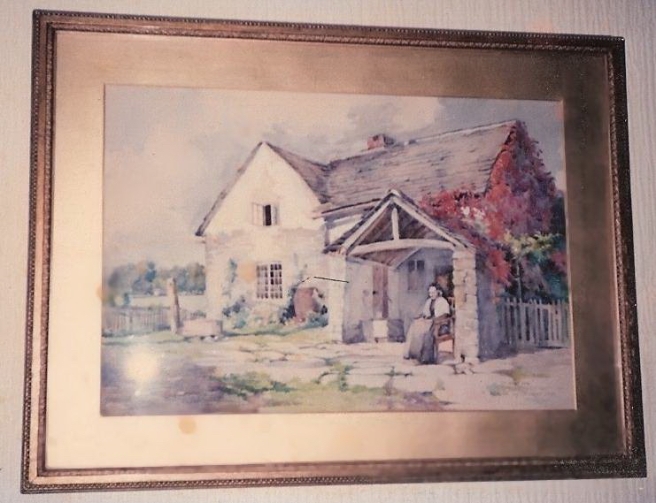 (Painting of Townsend from Avril French) 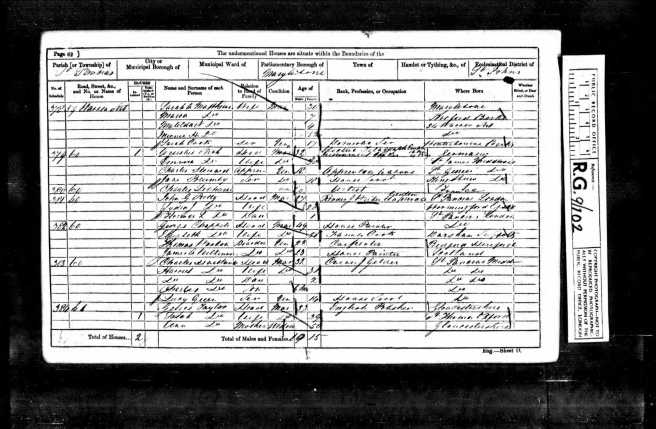 By 1861 Young Thomas has left the family home and the quiet tranquil Rural Village life of Byford and has headed for the bright lights of London. Thomas can be found listed as a Boarder and Carpenter at 60, Warren Street, St. Pancras, London. Whether Thomas was an apprenticed Carpenter or not, I haven’t been able to prove or disprove, but this is certainly a reasonable reason for his arrival in London. He is living at the home of George Chappell, a House Painter.

Not long after arriving in London, Thomas meets and Marries his Wife, a lady of Italian descent, Nicolina Elizabeth Stampa. Nicolina had previously been married to a William MacDonald, whilst she was living in Edinburgh, who had sadly passed away. Nicolina and her Siblings had migrated from Edinburgh to St. Pancras and were living together, around the same time that Thomas Wootton arrived in St.Pancras.

On 3rd March 1862, Thomas Wootton Marries Nicolina McDonald, at the time he was 24 years old and she was 39 years old. They Married at St. Mary’s Roman Catholic Chapel in St. Pancras, London. Witnesses to the Marriage were Nicolina’s older Brother, Louis A. Stampa and Mary Cole, Louis Stampa and Mary Cole were later Married in 1864. They both listed as living at 28, Ponsford Terrace, St. Pancras, London at the time of the Marriage. Their life circumstances, prior to their Marriage would have been vastly different. Not only was their a large age gap, of 15 years, but Nicolina was a Widow with two Daughters aged 9 and 11. They also came from vastly different backgrounds, Thomas from a small rural location, whereas Nicolina was from Italian descent, her Father arriving in Edinburgh from Como in Italy and she had been living in a large city, Edinburgh. Being married would have given Nicolina a more respectable appearance, but it’s difficult to guess why Thomas would have Married somebody much older than himself. They could have met whilst Thomas was boarding, the year before they Married. He was boarding with a House Painter and there were connections in the house to Scotland and Nicolina’s Brother Louis was also a House Painter. Of course all that is pure speculation.

The following year on 28th May 1863, their only child, William Tom Wootton was born. By this time the Family had moved to 106, Carlton Road, Kentish Town, London.

In 1871 Thomas is living at 9, Platt Street, St. Pancras, London, at home with Thomas are his Wife Nicolina Wootton, their Son, William Tom Wootton, plus also her children from her first Marriage, Mary S McDonald and Louisa W McDonald and her Sister Caroline Stampa. Thomas is listed as a Carpenter.

By 1881 Thomas and Nicolina had moved to 23, Hadley Street, St. Pancras, London. Living at home with Thomas and Nicolina are their Son William Tom Wootton, along with Nicolina’s Daughter from her first Marriage, Mary McDonald and Nicolina’s Sister, Mary Stampa. Thomas’s occupation is listed as a Joiner. Also living at the same address is Boarder Frederick Somerset who was occupied as a Lead Glazier, the same occupation as Thomas’s Son, William Tom Wootton. 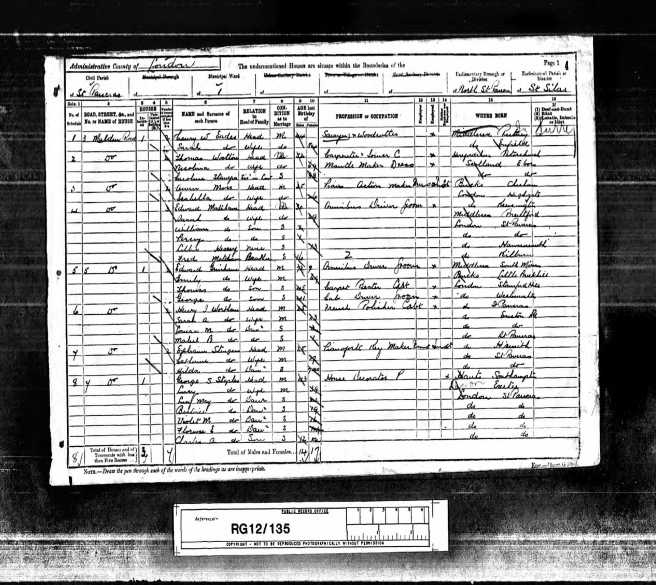 1891 Brought yet another move within the St. Pancras area, the family had moved to 3, Malden Road, St. Pancras, London. At home with Thomas and Nicolina is Nicolina’s Sister, Caroline Stampa. Thomas is listed as a Carpenter and Joiner. 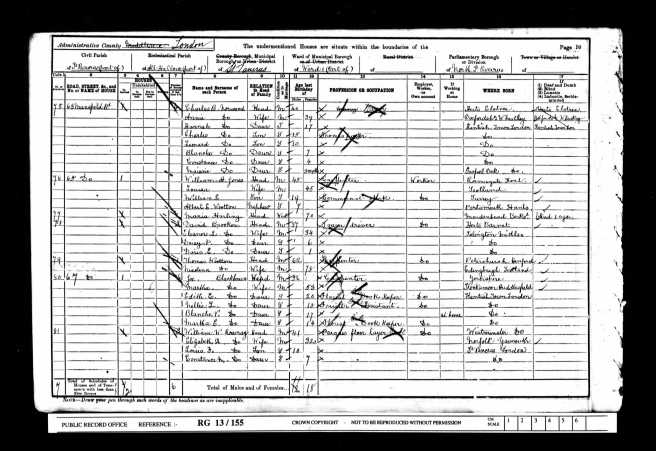 By 1901 Thomas and Nicolina have moved again, within the Parish of St. Pancras, to 65, Mansfield Road, St. Pancras, London. By this time they are living alone, but living within the same building is Nicolina’s daughter from her first Marriage, Willimina McDonald, who by this time had married William A Jones. Thomas is listed as a Carpenter.

For a large part of Thomas’s life, he lived at various addresses within short distances of each other, within the Parish of St. Pancras.

The Family lived about four miles north-west of the City of London in an area centered on North St. Pancras, which is north of the Regent’s Canal and the London and North Western Railway line and either side of the Hampstead Junction line. In fact, the houses of Hadley Street where they lived,  backed onto this line. The area would not have been very desirable owing to the great amounts of noise and air pollution issuing from the steam trains.

This was largely an industrial and commercial area developed between the 1840’s and 60’s when the development of estates rapidly destroyed the rustic middle-class atmosphere. The character of these estates was rapidly lowered by the development of the railways which filled the air with their smoke and steam and the constant clanking of shunting trains in the sidings. The roads too, were filled with traffic to and from the various rail depots and much of it still horse drawn.

The streets were crowded with small terraced houses each one measuring only about 12 to 16 feet wide by 20 to 40 feet deep and often the longest part of any house was only about twice the total length of its frontage. Most houses were built directly on or only several feet back from the pavement and their back yards were either non-existent or up to a size equal to that of the corresponding house. These cramped houses were well placed for the many local railway workers, one of whom was Henry Compton, a Railway Engine Driver, the future father-in-law of William Tom Wootton, who lived in nearby Haverstock Hill.

Within a radius of a quarter of a mile from Hadley Street there were no parks or green areas amongst the houses. However, there were 6 schools, 8 churches, 2 mission halls, 2 other halls, 2 post offices, 1 bank, 1 police station, 1 public bath and wash- house and 21 public houses!

Sadly the next record we find for Thomas is his Death Certificate and Thomas Died on 25th April 1909 at 9, Lismore Road, St. Pancras, London, he was 70 years old and listed as a Carpenter, his cause of Death was Cerebral haemorrhage and cardiac failure. The informant at Thomas’s Death was his Grandson Albert E Wootton of 65, Mansfield Road, St. Pancras. 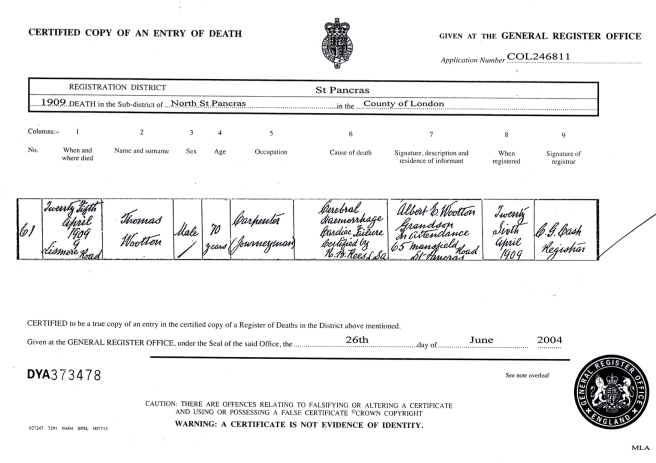 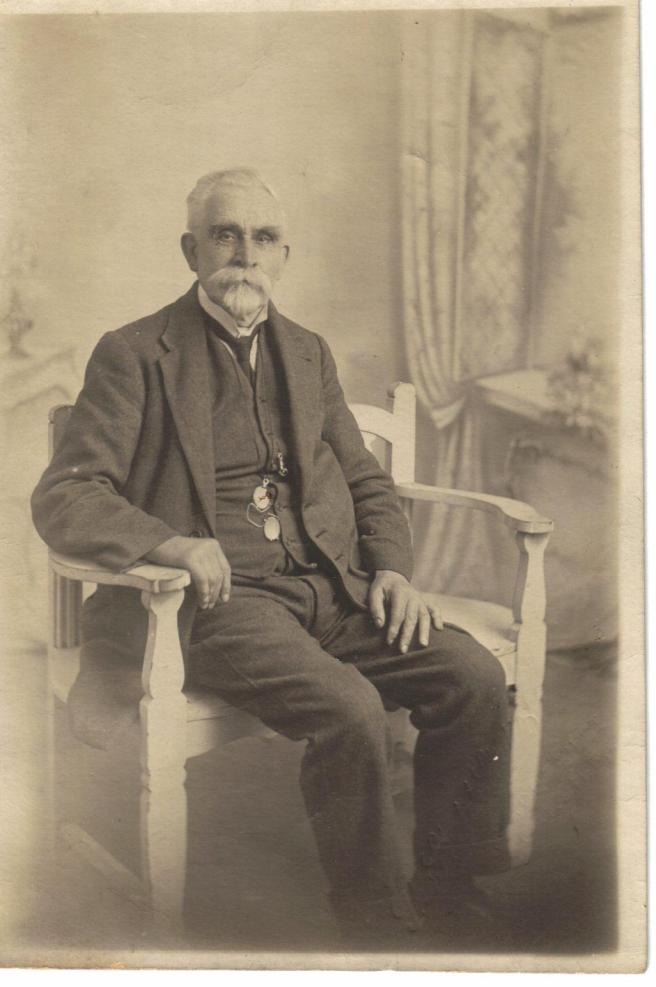 At some point, before he died, Thomas has a change of Religion, to the same Religion as his Wife Nicolina, Catholicism. This could have been on his death bed to ensure that they were buried together. 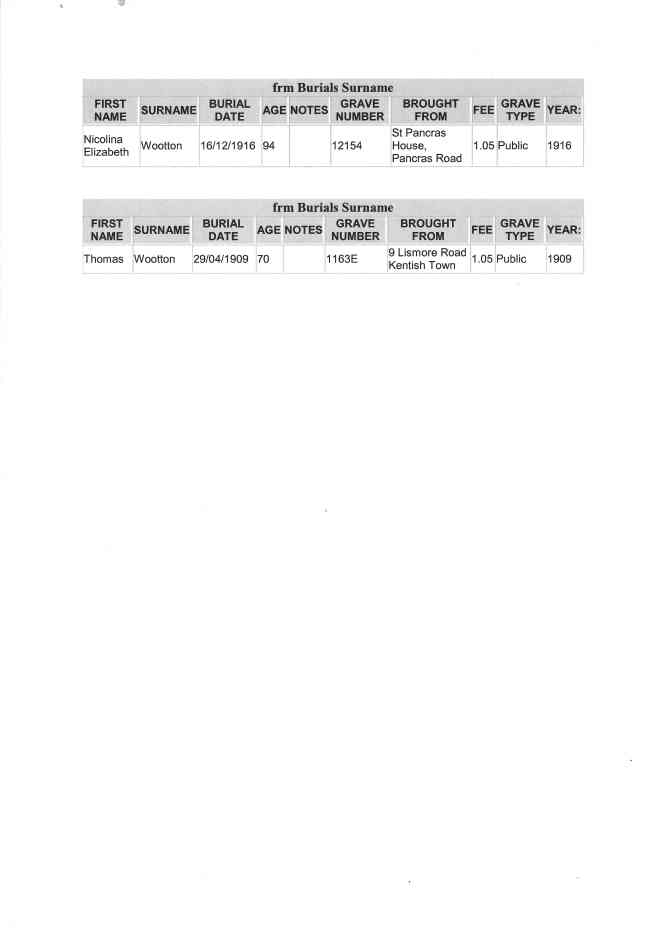