Welcome to Week 36 of my Genealogy challenge, from the wonderful Amy Johnson Crow, of writing something about your Ancestors for a whole year, #52Ancestors in 52 weeks. This week’s prompt is ‘Labor’

The obvious choice this week is our dear old “Ag.Lab”, we all have a few of those on our trees don’t we? A lot of my direct paternal line Ancestors worked the Farmlands of Rural Essex, but what was their life really like, what was their daily routine? What time the rise and finally get to bed? How were they affected by things like the Weather?

There are so many wonderful resources now available to the budding Family Historian, to help us understand the lives and occupations that our Ancestors followed, here is my little glimpse into the life of an ‘Ag.Lab’.

Around 200 years ago approximately 75% of England’s population were employed as farm labourers, with very few of them actually ever owning the Farm itself. Like many things still today, the wealthy controlled the Land and ownership and the rental of Land was typically broken down like this.

The Landlord was typically someone from the landed gentry and he rented the Farm itself to the Farmer. Our typical Agricultural Labourer was normally a peasant, purely surviving from what he could make from the Land.

The land was divided in long narrow strips and the common land allowed peasants to grow their own vegetables, raise and graze their animals, but if the harvest was smaller than usual or if any other unexpected losses had happened, maybe due to a wet summer for example then winter could be cold, long and a hungry time for our “Ag.Lab” and his Family.

A typical Farm Labourer’s house was one room on the first floor and one room above it, no sanitation, no water, poor hygiene and bathing was infrequent and a luxury.

The principal land use was growing grain and crops, or raising sheep for wool or cattle for milk, both required a lot of manual labour. Farming tools were common, but until machines were invented, animals were raised for food, but until ploughs were invented, they were not used extensively for cultivating the land. Rural life depended on good weather in the summer resulting in a good crop, as a long winter meant hunger and discomfort. People typically rose with the sun and went to bed when darkness fell.

Farms were ploughed in the late autumn or winter and wheat (the most common and profitable crop) barley, and oats were planted. Sheep were grazed throughout the field to fertilize the crops and after cultivation, the soil was “harrowed” to break it into smaller chunks. Wheat was cut with the sickle and a scythe was used in the second half of the century. There were just three holidays: Good Friday, Shrove Tuesday, and Christmas Day.

Wives of the harvesters were employed to rake the cut corn (wheat, barley, oats) into rows ready to be tied into sheaves and numbers of women, boys, and girls worked at various tasks and were paid much less than adult males.

Jobs which were almost exclusively done by adult male workers were the care of farm animals, milking cows, feeding pigs, herding and shearing sheep and looking after the poultry along with trimming and layering hedges and maintaining the farm buildings, fences, gates, farm tracks, ditches and ponds.

Before enclosure, a Farm Labourer with say a Pig or two, a Cow and some Chickens, kept on the common, could maintain a certain measure of economic independence however by 1800, new methods of agriculture machinery were being developed and the Landed Gentry recognised land use would be more efficient in larger plots so enclosure ie “the process of inclosing (with fences, ditches, hedges, or other barriers) land formerly subject to common rights”, occurred.

Prior to enclosure, there were common areas that belonged to everyone and here peasants could gather wood and grow a few crops. After enclosure, it was returned to the control of the landowners and redistributed and was no longer available for the poor to use. Grazing your Animals on someone else’s land became illegal, and small farmers (who had no political influence and were generally given the poorer plots), often lost access to wood and water and this increased hardship for the rural poor and our “Ag. Labs.”

Squires and farmers prospered as never before but the labourers’ share of the wealth which they had toiled to create, increased very little.

.1830 meant with increased mechanisation and the Industrial Revolution at its height, the introduction of threshing machines took away valuable work from our “Ag. Labs”.

‘Swing’ riots broke out in the southern counties of England, areas most affected by enclosure. The rioters were demanding a minimum wage, the end of rural unemployment, and tithe and rent reductions. The riots took the form of machine breaking (the hated threshing machines), arson, meetings and general unrest. These riots were the first demonstration of agricultural unrest and this unrest continued particularly after the passing of the 1834 Poor Law Amendment Act.

Before 1834 poor relief was dealt with at parish level. It was up to the poor law guardians to decide who was eligible for help, and as they often knew the recipients, it could be a fair system. Labourers could ask for ‘outdoor’ relief to supplement their loss of wages due to illness or unemployment. The Poor Law Amendment Act of 1834 aimed to do away with outdoor relief and make the workhouse the only way of accessing help. It was hoped that this would act as a deterrent and make sure that only the genuinely destitute would apply.

Agricultural labourers with families to support and no specialised skills to offer were hired on a casual basis for specific tasks. They would be paid only for the work they did and received nothing if they were sick or if the weather was too bad for them to work. Wages were, in general, very low and unemployment due to a surplus in the labour force was high. Many agricultural labourers had to depend on poor relief to help them through the difficult times.

The average farm labourer had one cooked meal per week and there was likely a small garden in which they would grow vegetables, keep chickens, or a pig. Bread, milk, cheese, eggs, and beer were staple foods. They almost never had meat, sugar, or tea. Bacon would be seen as a luxury.

Bread was baked in an oven built of brick with an iron door at the community bake house. The bake house had a grate at the bottom and wood was burned below to get the oven hot. After it came to temperature, the bread dough was placed on top of the grate. When the bread was baked, the ashes were picked out of it. Boiling food was more common than baking it.

Drinking water was obtained from a well or stream and brought to the cottage in pots. Water pumps replaced wells in the early 1800’s however it was often contaminated, so people drank tea and beer instead. Beer was provided free to the labourers working in the fields and if a labourer wanted to drink after work, he went to the pub.

Was life tough? You bet it was, were conditions harsh, of course they were, but our Ancestors worked and scraped a living as best they could and without them of course, we wouldn’t be here today! So a big thank you to my Chiddicks Ancestors for surviving in those tough conditions……….round this off better 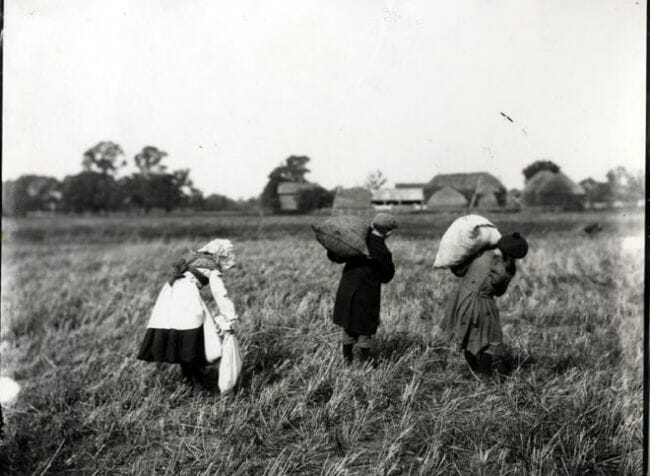