This is the 11th in my series of blogs telling the life stories of my 2 x Great Grandparents and its the turn of Martha Harvey next.

Martha was the sixth of seven children born to Edward Harvey and Hannah Bullen and she was born on 3rd September 1864 which was kindly recorded on her Baptism record by a very helpful incumbent! She was Baptised in Greenwich, which was classed as Kent then, on 14th December 1864 and her parents were living at Coltman Street. Edward’s occupation is listed as a Waterman and this is the third separate line on my family that contain Waterman! I did write a story about my connections, or non-connections to the sea, maybe I missed the point entirely that half my Ancestors were Waterman! 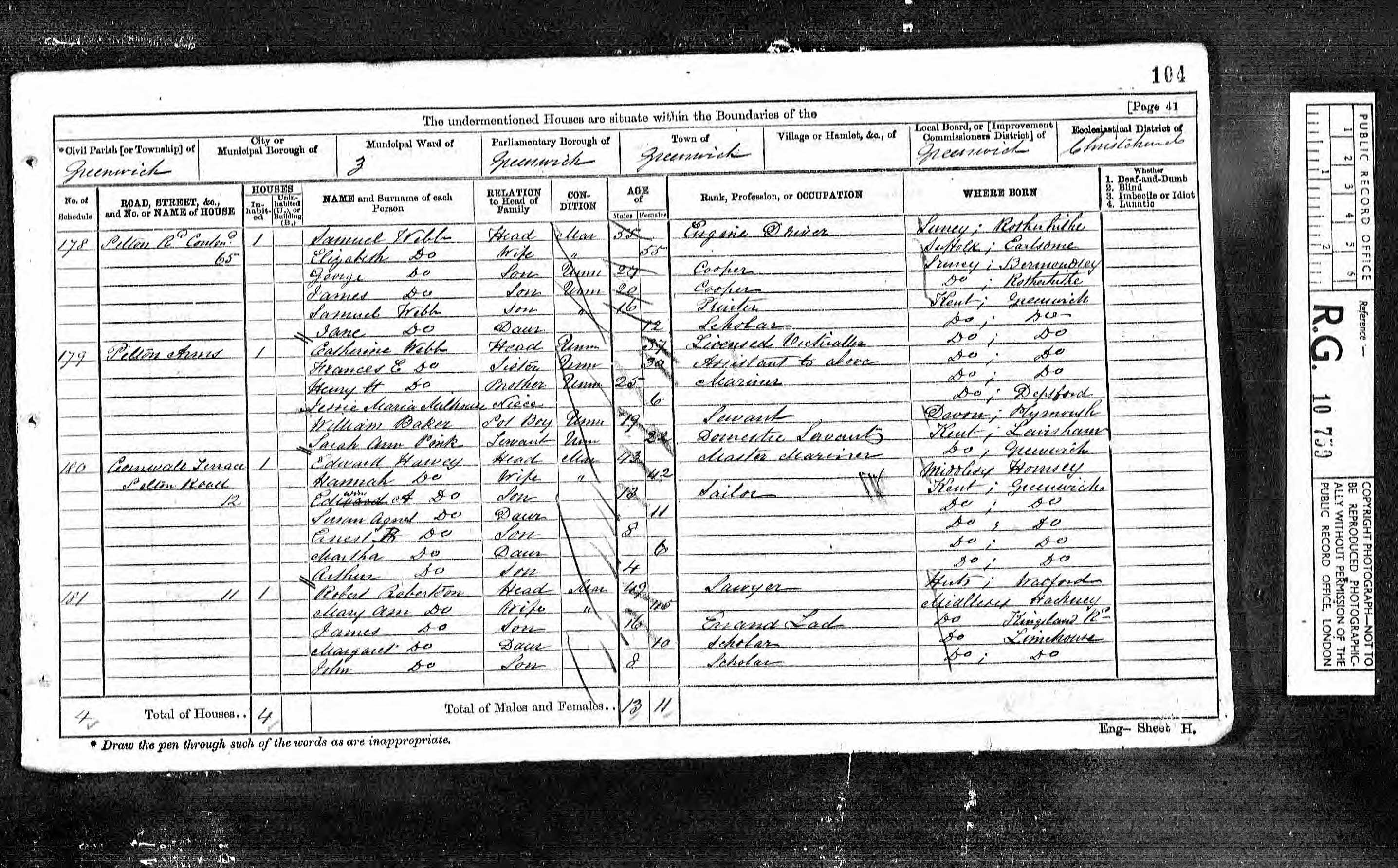 In 1871 the Harvey’s are living at Cornwall Terrace, Pelton Road, Greenwich East in Kent and living at home are Martha’s parents, Edward and Hannah and Edward has risen to the lofty heights of ‘Master Mariner’. A Master Mariner is a licensed Mariner who holds the highest grade of seafarer qualification; namely, an unlimited Master’s license. Such a license is labelled unlimited because it has no limits on the tonnage, power, or geographic location of the vessel that the holder of the license is allowed to serve upon. At the time, Greenwich was seen as the ‘Maritime Capital’ of the World 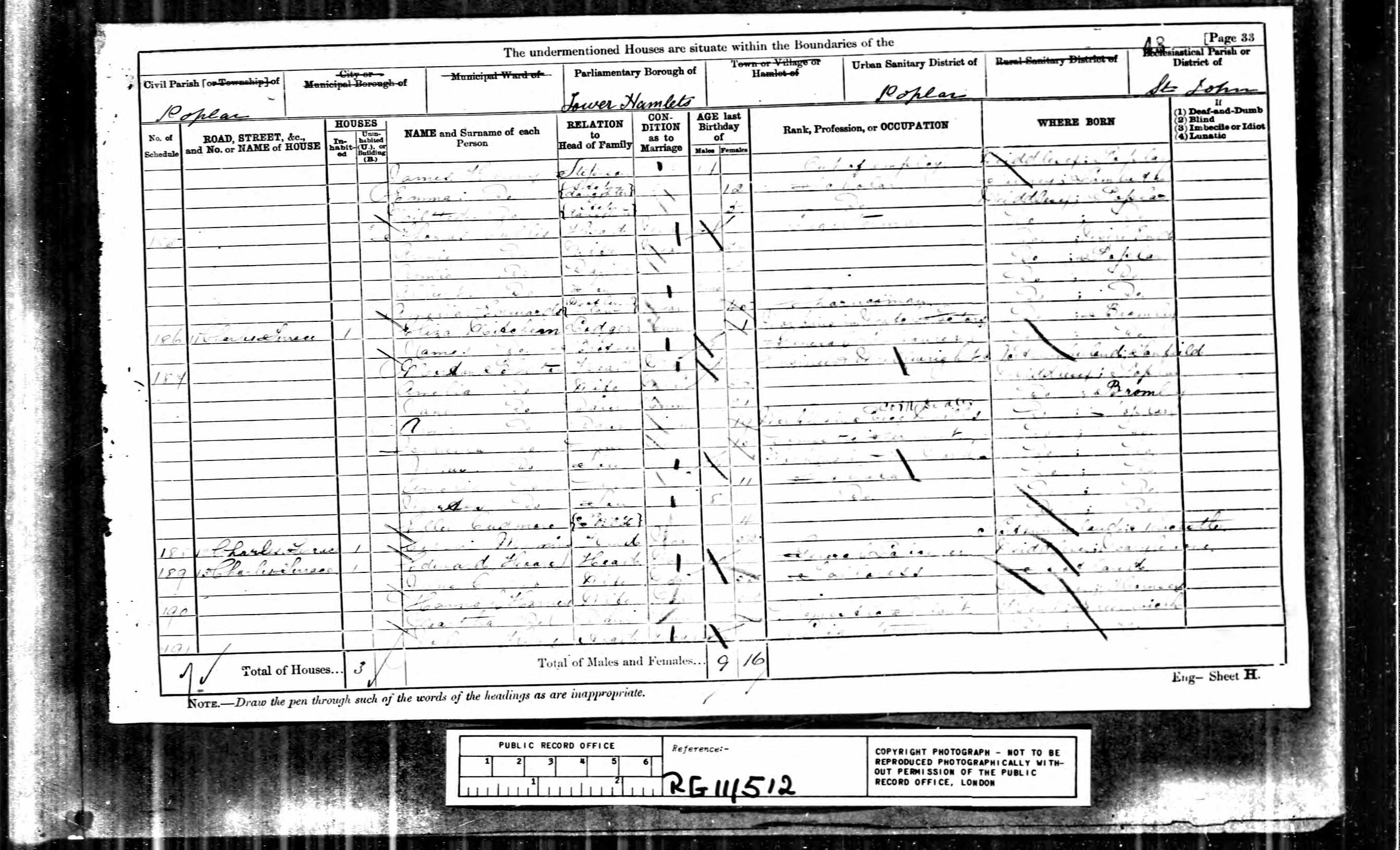 By 1881, Martha and her Mother are living in East London, at 13, Charles Terrace, Poplar, London and they are sharing the accommodation with a family named Hoare. I have been unable to make any connection between the two families and the fact that Hannah is listed as the ‘Head’ of the household, leads me to believe that the two families lived in separate parts of the same house. Martha’s occupation is listed as a Domestic Servant. Her Father is missing from this Census, but is still alive and well, I was able to find him abroad the Vessel ‘Flora”, at Greenwich listed as the Master of the Vessel. All Martha’s siblings have either sadly passed away or fled the Family home, Martha is at home with just her Mother, Hannah.

Whilst working as a Domestic Servant and moving around the Docklands of East London, Martha met her Husband to be, Henry Barnes, who was a Rigger working in the East End Docklands.. The Barnes Family, also had a long line of connections with working on the Thames and living in and around the Docklands of the East End of London. Martha and Henry were married on 10th May 1883 at All Hallows Church in Poplar, London. At the time Martha was living at 34, Benledi Street in Polar and Henry was living at 15, Brunswick Road, Poplar. Henry was listed as a Labourer, most likely a Dock Labourer and his Father was listed as a Rigger, another connection with the Docks. Martha’s own Father, Edward Harvey is listed as a Waterman.

When my Great-Grandfather was born, 17th March 1890, Martha and Henry had moved further along Benledi Street and were living at No. 49. 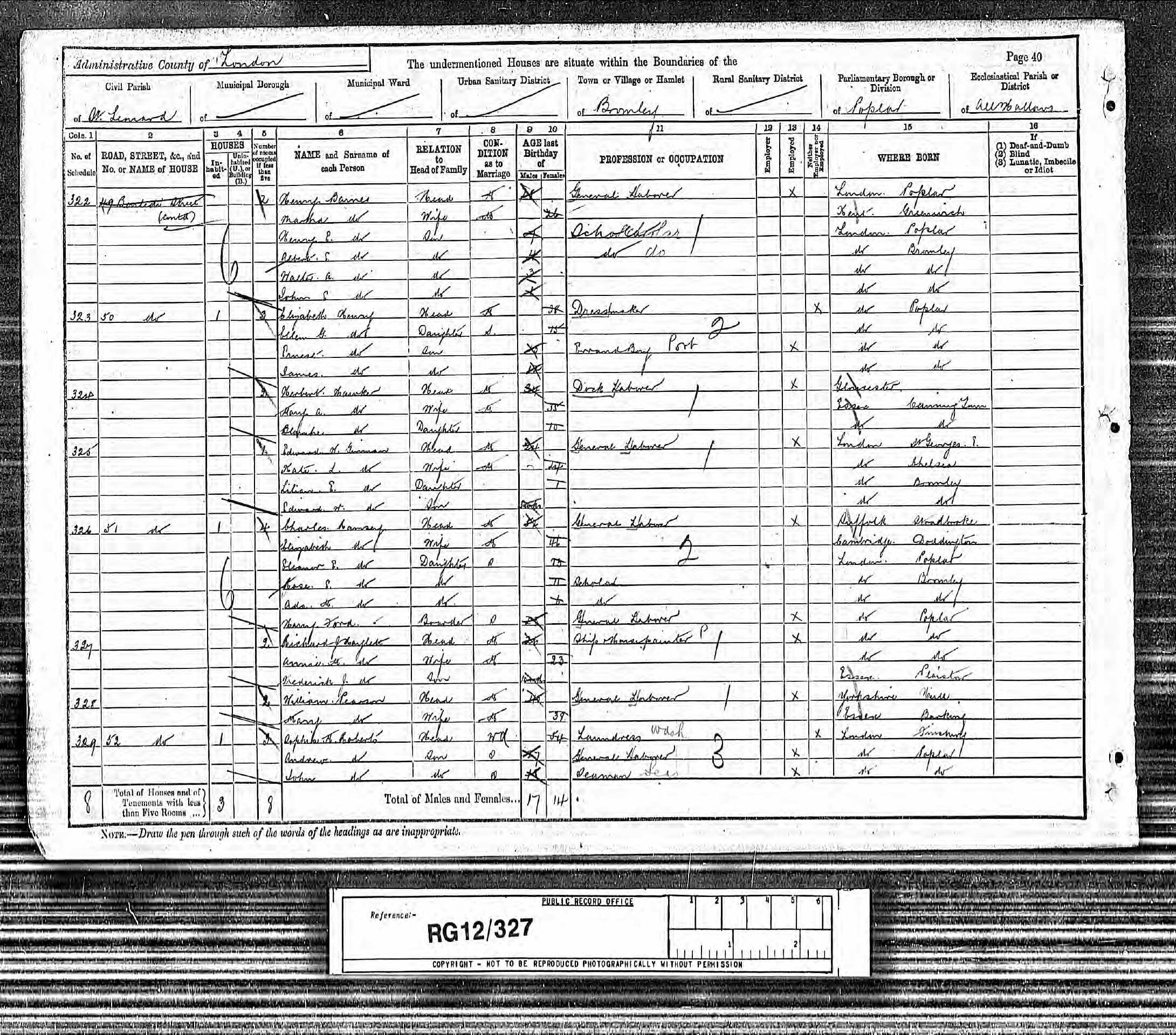 The Family are still living at 49, Benledi Street at the time of the 1891 Census and counted at home with Martha and Henry are the four eldest boys, Henry Edward, Albert Ernest, Walter Arthur and John Edwin. 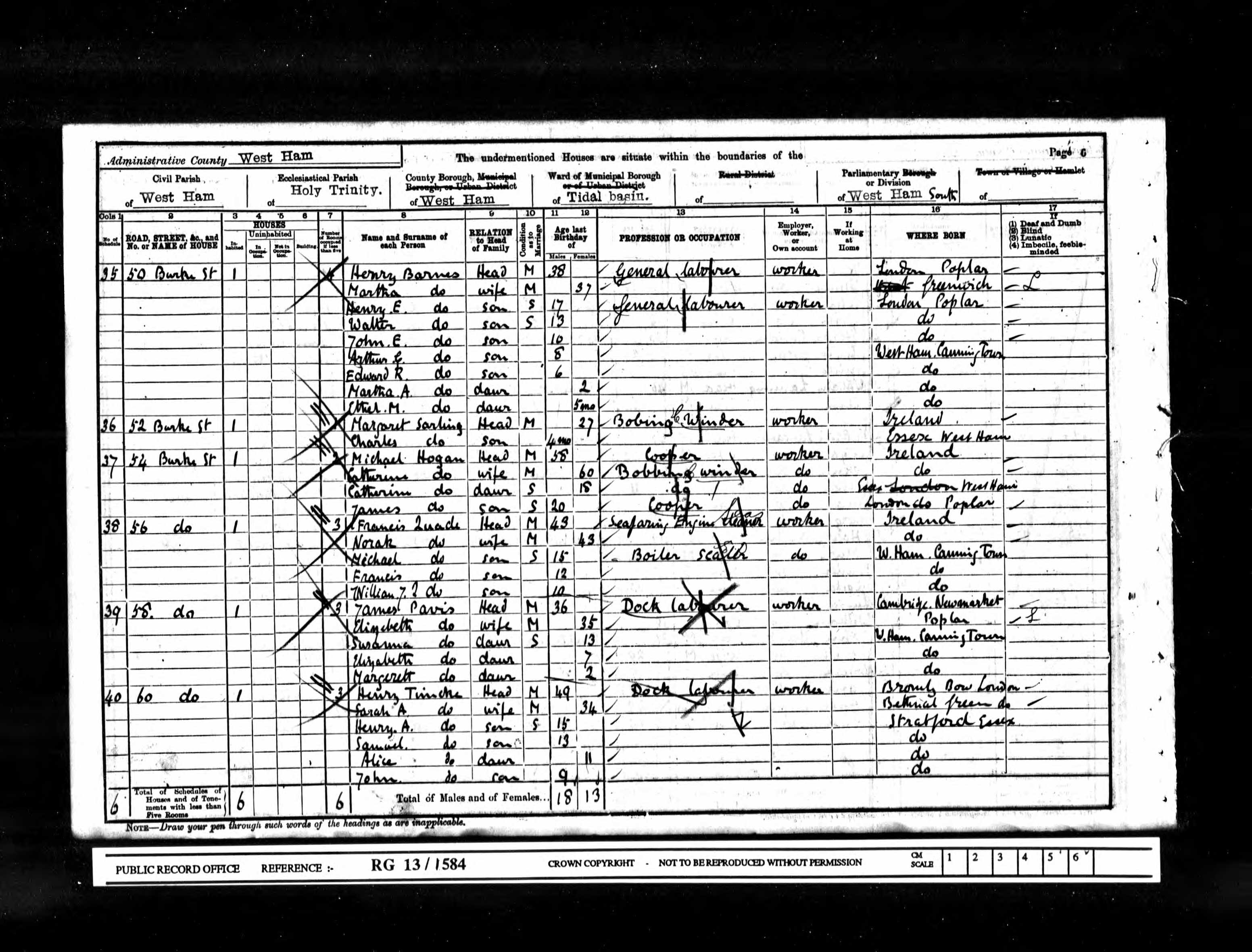 By 1901 Martha and Henry Barnes have moved to West Ham, again in the East End of London and in the Canning Town District. They are listed as living at 50, Burke Street and at home with them are all the children, apart from Albert Ernest Barnes, who by this time had left the family home.

Sadly Martha’s life is cut tragically, short at the age of just 41 years, she died from Phthsis Syncope, commonly known as Tuberculosis, on 28th July 1905 at the Union Informary in North Leyton. At the time Martha and Henry were living at 66, Hemsworth Street, Canning Town, London. Because Martha’s life was cut so short, it’s difficult to get to know her more, from the available records. She is one of those elusive Ancestor’s, who manages to slip through the records, making only the briefest of appearances. With no living descendants on this line, its impossible to make judgements about her character or her life. I am sure that like so many other families living in the heart of the East End of London, life was tough and difficult, raising 8 children in these conditions was a challenge in itself. Her husband Henry went on to live for another 40 years, but interestingly, never remarried, itself unusual at the time. So Grandma Harvey, although a difficult Ancestor to research, your story can now be told and hopefully one day, once record offices open again, we might be able to reveal a little bit more about your life. 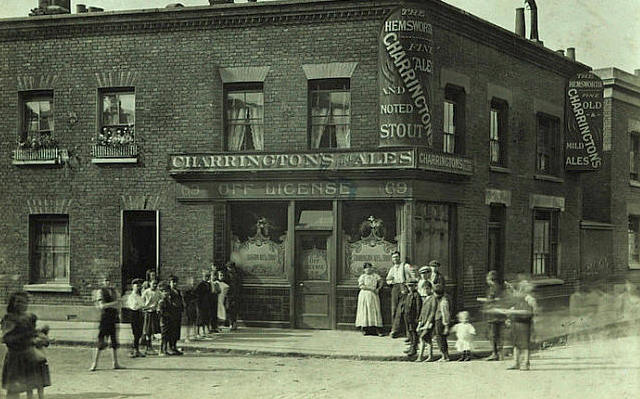