For those of you that follow me online, you will have no doubt seen the post I made on Father’s Day, about the amazing DNA breakthrough that I made on my Family Tree, to say that I was excited is the biggest understatement of the year!!!

To give you some background, after I started researching my Family Tree, I quickly discovered that one of my Great Grandparents, Marguerite Longland Lukes had an ‘Unknown Father’ and this remained the case for around 20 years.

I left that in the ‘Too difficult to do box’!

Like many Genealogist’s, I decided a couple of years ago, to take the plunge and take a DNA test with Ancestry. You can follow this series of earlier blogs here to flow my whole DNA journey.

What I discovered was that I was left with a string of results that I couldn’t make head nor tale of and two years later, after one of the steepest learning curves I have ever had to climb and I am slowly working my way through the maze of DNA Matches.

So how did I make the breakthrough and piece it all together?

Well initially it felt I was looking for a needle in a haystack, only I didn’t even know which haystack to start looking in! So I needed some inspiration, something to make the whole task a lot easier, that magic ‘lightbulb moment’.

It was whilst writing one of my #52Ancestors blogs that it suddenly hit me, like an express train! I had often wondered, with such an unusual middle name of ‘Longland’, was this in fact the Surname of our mystery Father? Easy to surmise or guess at, but how can I prove it?

So I decided to search on my Ancestry matches, for anyone with the surname Longland in their tree, it was worth a shot, results zero matches. So I left it for a while, then remembered that I had persuaded my Paternal Aunt to take a test for me, so I checked her matches with the name Longland, bingo five matches, with some decent size trees built between them. All the matches appear to descend from the same branch of Longlands, all from the Yardley are in Northamptonshire, not very close to Gravesend in Kent, but you never know. 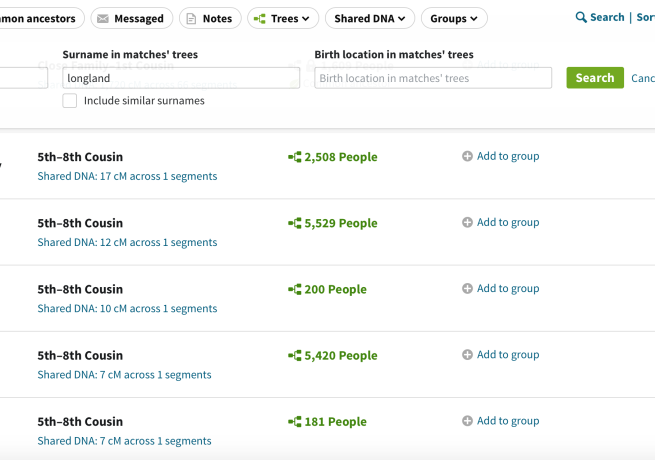 So I sent off a message to all of the matched people with my questions.

One very kind lady in Canada, replied immediately and we exchanged a few messages and emails and between us we started to work our lines back. The difficult part was placing a Longland on her line, somewhere near Kent in 1883, of course there might not be anyway of doing that, or proving that. So systematically between us we followed all the male descendants going back to a James Longland born in 1732 in Yardley, it seems this line, like many of my other lines, was full of people that never left the confines of their own Parish!

I began to think this was a waste of time and maybe our match was. a red herring and on a totally different line and name, but my new ‘Cousin’ wasn’t giving up the fight that easily. One by one we eliminated them as best we could, until I found a possible candidate named Arthur Robinson Longland. Interestingly the family had a tradition of naming children with the middle names of the Mother’s maiden name! Not quite the same as my theory, but something that I latched onto, in the early stages of ‘clutching at at straws’! So I added Arthur to my tree, as the Father, to see what Thrulines would give me. An agonising 24 hours later and nothing absolutely no new matches, I was deflated, again thinking I was barking up the wrong tree. So once more I left it.

I must admit that I trawled online trees on Ancestry for weeks, looking for that one piece that would put it all together.

The next day I looked into this family line a bit further, don’t ask me why, but I had a look at the three brothers of Arthur and then by a massive slice of luck I struck Gold!!!

John William Longland Born in Yardley, Northamptonshire married in 1885 in Grays in Essex, two years after Marguerite’s Birth and literally a stone throws and the width of the Thames, away from Gravesend, the marriage even took place in the actual Church that I myself was Baptised in!!!! Serendipity overload!!

Could this finally be my Man!!!

I had to wait an agonising 24 hours again for Thrulines to kick in, the longest wait ever, then on Father’s Day of all days, Thrulines links me to 4 new DNA Matches all on this line!! So after a 20 year wait I now have a new Great Great-Grandfather, John William Longland and finally I have 16 out of 16 Great Grandparents. So if you are a doubter as to what DNA can bring to the table, it can prove or disprove a theory and can open doors that a paper trail could NEVER open.

Only a Genealogist can feel the excitement that I felt this weekend. Its taken 20 years, some dogged determination, a great deal of luck as well, but I managed to find my first ever needle in a haystack!!! Let me know if you have discovered your own ‘needle in a haystack’.